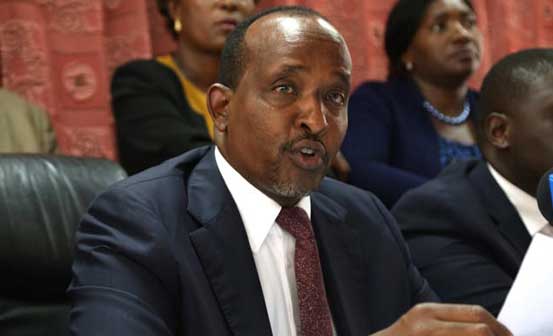 By Cyrus Ombati and Wilfred Ayaga

Leader of Majority in the National Assembly Aden Duale. (Photo: Moses Omusula/Standard) A section of Jubilee MPs have alleged a plot by Opposition leader Raila Odinga to topple the Government. Led by Leader of Majority in the National Assembly, Aden Duale, the MPs claimed Raila is stoking the International Criminal Court (ICC) issue to effect regime change in the country. The MPs were reacting to Raila’s statement on Tuesday that President Uhuru Kenyatta and his Deputy William Ruto should have been detained by the ICC prior to the 2013 polls. They claimed that Raila was working with foreign countries in his scheme to get power though the back door. The foreign powers, they claimed, were behind another scheme to pump money into the country to influence the choice of Kenya’s next President. “Odinga and his foreign benefactors still view ICC as a useful instrument for regime change. He and his foreign masters aspire to take power through undemocratic means, institutional sabotage and overthrowing the constitution,” said the MPs.

Uhuru and Raila to tour Western in vote hunt Nyanza MP distances himself from anti Raila leaflets Opposition faults Uhuru on ICC pullout bid They said Raila’s sentiments during the Wiper Party National Delegates Conference in Kasarani indicated he wanted and still wants Uhuru and Ruto to be jailed so that he can easily get to power. On Tuesday, the Orange Democratic Movement (ODM) leader suggested Uhuru and Ruto should have been detained at the ICC where they were facing trial in the run-up to the 2013 polls. Citing former Ivorian President Laurent Gbagbo and Ugandan rebel leader Dominic Ongwen who are in ICC custody as their cases proceed, Odinga said ICC was lenient on Uhuru and Ruto by allowing them to campaign in the face of the crimes against humanity charges against them. Introducing ICC Odinga’s sentiments, which now threaten to re-introduce the ICC debate 10 months to the election, were prompted by remarks by President Kenyatta during this year’s Jamhuri Day celebrations that Kenya will consider withdrawing from the international court. In the past few months, CORD and Jubilee have been tussling over corruption allegations, but ICC now promises to be a factor in the forthcoming elections. The MPs’ claims of foreign interference in the next year’s polls echo similar claims by Uhuru on Monday during his Jamhuri Day speech. Wednesday, Interior Permanent Secretary Karanja Kibicho also claimed foreign donors have channelled between Sh12 billion and Sh14 billion to influence next year’s polls, and promised to prove the allegations soon. “These are not wild allegations. Give us time to show you it is tied to their activities,” he said. Repeating Uhuru and Jubilee MPs’ claims that the foreign funds were disguised as civic education support, Kibicho said the Government was investigating all agencies involved in the scheme. “There are things they must tell us and let there be transparency,” he said. The focus on NGOs as a factor in the 2017 polls’ race comes two years after 500 organisations were blacklisted in what was seen as a war on the civil society.
Read more at: https://www.standardmedia.co.ke/