Mombasa tycoon TSS’ land up for sale over bank debts 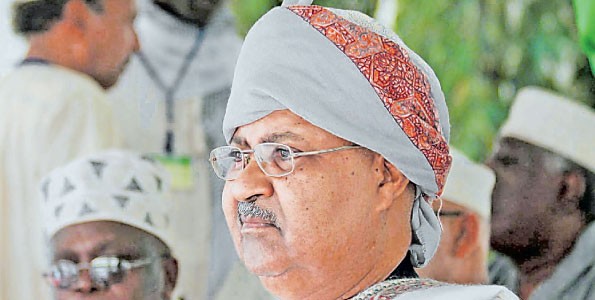 Mombasa tycoon TSS’ land up for sale over bank debts

Commercial banks that had lent Mombasa tycoon Twahir Sheikh Said (TSS) billions of shillings have put up more than 6,700 acres of his leasehold land holdings and property on the Kenyan coast for sale, adding impetus to his business empire’s free fall that began late last year

Mr Said, who died early this month, had defaulted on loans amounting to more than Sh3.5 billion that various entities in his vast business empire had borrowed from local banks but were unable to pay by early last year.

READ: From the height of political power and business, TSS empire falls apart

KCB Group, NIC Bank and Bank of Africa (BOA) are among the lenders that had disbursed loans to various subsidiaries of the TSS empire, which subsequently failed to service the debts.

The assets that are expected to go under the auctioneer’s hammer next Monday include idle and developed beachfront land in Lamu, Mombasa and Kilifi counties, according to a notice by Garam Investments Auctioneers.

The properties sale is expected to fetch billions of shillings in aggregate, helping to retire the TSS loans that are estimated to constitute the banking industry’s largest exposure to a single entity.

Garam says prospective bidders will need to deposit between Sh1 million and Sh10 million before participating in the sale, indicating the high value of the properties.

The sale is expected to attract institutional investors and wealthy individuals.

The assets on sale represent properties that the TSS entities had pledged directly to the banks or through KAAB Investments, a company owned by the late businessman’s brother-in-law Aweys Mohamed Ahmed.

Mr Ahmed was part of a group that ran the TSS empire more recently as poor health slowed the billionaire down.

The auctioneer has put up for sale a 6,178-acre property fronting the Indian Ocean in Lamu County, and which is currently used for salt production by TSS Salt Manufacturers Limited.

“The property has a long and winding frontage to the Indian Ocean to its southern boundary and fronts Witu to Mokoye road to its northern boundary,” said the auction notice.

Some 466 acres in Kilifi, also owned by TSS Salt Manufacturers, are also on sale, targeting investors with an interest in salt production.READ MORE

Mombasa tycoon TSS’ land up for sale over bank debts Reviewed by samrack on January 31, 2017 .

Share thisFacebookTwitterPinterestEmailWhatsAppThe late Mombasa tycoon Tahir Sheikh Said popularly known as TSS. PHOTO | FILE  By JAMES KARIUKI Mombasa tycoon TSS’ land up for sale over bank debts IN SUMMARY KCB Group, NIC Bank and Bank of Africa (BOA) are among the lenders that had disbursed loans to various subsidiaries of the TSS empire, which subsequently