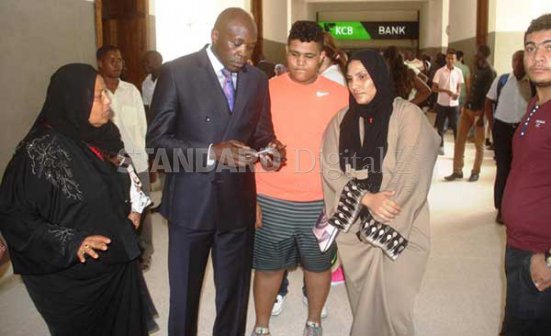 At about 4pm on Monday, six Kenyan special agents reportedly escorted four suspected drug dealers wanted in the United States to an aircraft waiting on the tarmac at Jomo Kenyatta International Airport. Since November 2014, the two sons of slain drugs lord Ibrahim Akasha – Ibrahim and Baktash – as well as Indian drug suspect Vijaygiri Goswami and Pakistani Gulam Hussein had fought extradition to America where they are wanted by a New York court that indicted them for allegedly trying to import banned drugs. Last week, however, the High Court suspended the extradition proceedings, which were to resume on Monday. But the brief interlude sparked dramatic events. Armed men raided several homes at the Coast to arrest the four. Officially, the identity of the gunmen who seized the four is unknown. Police operation ALSO READ: US officials won’t testify in case involving Kenyans But sources said about 20 officers drawn from the Special Crimes Prevention Unit, Serious Crimes Prevention Unit, Anti-terror Police Unit and Anti-narcotics Unit staged the night raids on Saturday and Sunday. Sources said the team included foreigners whose nationality was not established. Family members said the armed men struck the Akasha compound in Nyali at around 8pm on Saturday. The armed men ordered Ibrahim, Goswami and Gulam into the vehicles and sped away to a secret location in Mombasa. Baktash was seized from another house in Mombasa on Sunday evening. The four were driven to Nairobi on Sunday night. On Monday morning, witnesses said they saw four vehicles drive into Directorate of Criminal Investigations (DCI) headquarters. The occupants were taken to the Anti-Narcotics Unit offices. American aircraft At about midday, they were driven to JKIA to board a chartered American aircraft. The plane arrived in New York yesterday. This was confirmed by Preet Bharara, the United States Attorney for the Southern District of New York, and Raymond Donovan, the Special Agent in Charge of the Special Operations Division of the U.S. Drug Enforcement Administration. Manhattan US Attorney Preet Bharara said: “As alleged, the four defendants who arrived yesterday in New York ran a Kenyan drug trafficking organisation with global ambitions. For their alleged distribution of literally tons of narcotics – heroin and methamphetamine – around the globe, including to America, they will now face justice in a New York federal court.” But DCI boss Ndegwa Muhoro had earlier said he does not know where the four are. But speaking in Mombasa yesterday, President Uhuru Kenyatta described the coastal town a narcotics hub and vowed to deal with all drug barons. “Their days are over. We are not dealing with peddlers, we will deal with the big fish. We will deal with the drug barons decisively,” the Head of State said during his tour of Mombasa. But it was apparent why officials were mum on the matter. After the extradition case failed to resume on Monday, as the suspects were missing, defence lawyer Cliff Ombeta applied for orders to compel the State to produce them. Yesterday, Lady Justice Dorah Chepkwony directed that the four suspects be produced in court within three days. Justice Chepkwony issued fresh summonses against Inspector General Joseph Boinnet and Muhoro to explain the whereabouts of the four suspects. She, however, declined to issue a warrant of arrest against Boinnett and Muhoro following an application by the defence lawyer. Ombeta said the two senior government officials had failed to honour High Court summonses and failed to produce the suspects as ordered. According to the Southern District Court in New York, an indictment issued by US Judge Gabriel Gorenstein on October 28, 2014, and delivered to Kenyan authorities through the US Embassy in Nairobi on November 10, 2014, the four “are wanted to stand trial in the United States District Court for the Southern District of New York”. Ombeta said news about the Akashas extradition to the US was just rumours since no Government official had confirmed the same. The four are wanted by various countries internationally including, the US, Italy, Seychelles, South Africa and India to face narcotics trafficking charges. Muhoro and Inspector General of Police Joseph Boinnet were summoned by a Mombasa court to explain the whereabouts of the four.
Read more at: http://www.standardmedia.co.ke/

How Akasha’s sons and two other drug suspects were rounded up for extradition Reviewed by samrack on January 31, 2017 .