A sign in Ngong points to the location of the Shizophrenia Foundation of Kenya. Is is at the foundation’s offices that the Reason to Hope program is run. (R. Ombuor/VOA)

Millions of Africans suffer from mental illness, but local superstition — and, some say, ignorance — can leave them undiagnosed and forced to suffer mistreatment and abuse.

That’s why a new approach to counter the problem has been headquartered in Ngong, a town of in Kenya’s Kajiado county, where a local initiative known as “Reason to Hope” is sending volunteers into surrounding villages teach people about psychiatric illness and identify those in need of care.

A recent visit to a Massai village in the north illustrated what the team is up against.

“Do you have any sick people here, people you think may be mad?” said one of the volunteers, who asked that his name be withheld.

No, said the local resident, allowing only that the village had had a history of “bewitched” individuals, and that one, a mad man, had recently died.

According to “Reason to Hope,” such exchanges are typical.

“[People in some communities] still believe that mental health is not a sickness but something that can be dealt with by the community spirits, exorcism of demons and other things,” says Reason for Hope Program Director Mary Wahome. “So for us, our main work is to let them know that it is an illness which, if treated well and given early intervention, can be managed.” 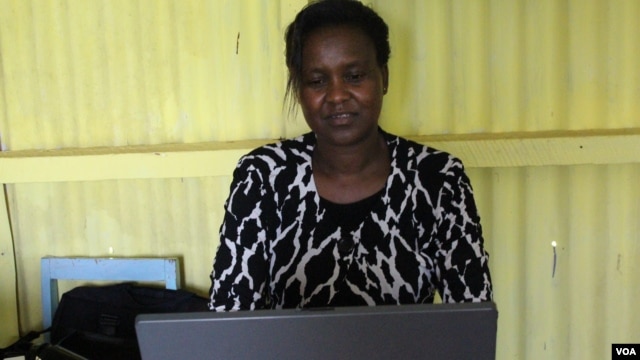 Mary Wahome, program director for Reason to Hope, is pictured in her office. The program has reached over 30,000 people suffering from mental illness in Kenya’s rural areas. (R. Ombuor/VOA)

Working with rural health clinics, Reason for Hope has reached over 30,000 mentally ill people in rural areas all over Kenya.

For some clients, the intervention is life-altering.

“My mum is bipolar, by the way, and sometimes you think it’s that curse from the ancestors, especially if you come from the western region like I do,” says 25-year-old Sheldon Moses, who was diagnosed with the disorder only after finishing high school. “Sometimes it’s alluded to that stuff but I think it’s also ignorance.”

Sheldon is covered under his parents’ private health insurance, otherwise he couldn’t afford the medicine that controls his symptoms, which costs about $30 a week. Moses Sheldon, who suffers from bipolar disorder, is seen taking a break. He decided to talk about his condition openly to promote awareness. (R. Ombuor/VOA)

“It is seriously expensive and I am [wondering] if a policy can be put in [place] on how to take care of this, the way HIV/AIDS has been taken care of with [antiretroviral drugs] being brought in by … USAID, which has chipped in and made it so much affordable to curb,” he said. “I know it’s not as much disastrous as how HIV/AIDS is, but if a program like that is to be done, it would really be helpful.”

Mainly funded by program members and outside supporters, KSF lakcs funding to cover regular treatment for all those in need.

But Wahome says dispelling myths and stigmas surrounding mental illness has made communities more proactive in caring for members who suffer. 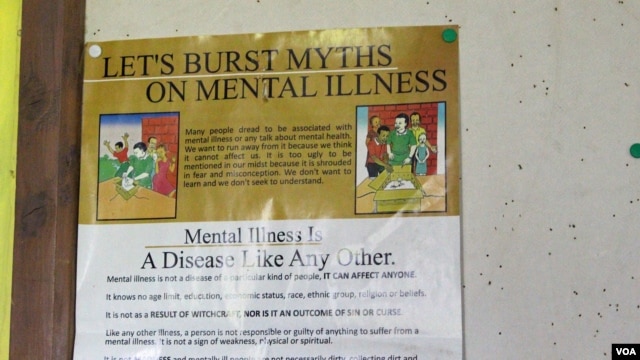 A pin-up poster promoting mental health awareness is seen on a wall at the offices of the Shizophrenia Foundation of Kenya in Ngong. (R. Ombuor/VOA)

Still, she added, that effective treatments for psychiatric disorders do exist, she believes the government should help provide them to those in need.