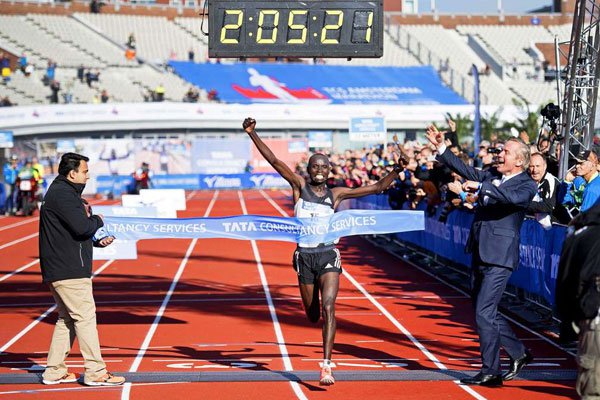 The big boys had the ritualistic, pre-London Marathon photo shoot on Friday at the iconic Tower Bridge.

But one Daniel Wanjiru is happy living in their shadows, the 2016 Amsterdam Marathon champion very much the underdog in Sunday’s epic race. He must have been holed up in his hotel room as the Nikons flashed on Tower Bridge, or was jogging unnoticed at Hyde Park. But he almost certainly won’t be an “also-ran” Sunday.

Traditionally, it’s not easy for a rookie to get an elite invite to the London Marathon, with elite athletes’ director David Bedford along with race director Nick Bitel, and Hugh Brasher before him, serially targeting known names.

But Wanjiru was good enough to get a ticket after just three marathons under his belt, and it didn’t take too much lobbying from his manager, Volare Sports founder Gerard van de Veen, either.

“This guy is special. I like his confidence,” van de Veen, who has the knack for producing 42km sensations, told us in Eldoret recently. The amiable Dutchman, a footballer in his youth, manages former and current world marathon record holders Wilson Kipsang and Dennis Kimetto.

Despite diving into the deep waters so early in his 42km career, he has done enough training, has been injury-free and is confident of what would be a surprise podium finish.

“I have done enough training and I started early preparations once I was listed as one of the elites for London and I’m confident I will win the race. I just want to be on the podium as a winner,” said the confident Wanjiru.

He competed in the RAK Half Marathon in February, just a build up in his training regime, which he says helped him sharpen ahead of Sunday’s big race.

“I ran in the RAK Half Marathon in February and it helped me a lot in terms of fine tuning where I saw there was a problem, and I think I’m now good to go,” said Wanjiru.

No, he doesn’t fear anyone: “The line-up has world beaters and I will not fear anyone because they have trained just like me and we will be running on the same course.”

“They should be prepared for a real battle since we don’t want to lose our title to other countries,” Wanjiru warned the big boys, referring to compatriot Eliud Kipchoge’s victory last year that was just eight seconds outside Kimetto’s world record 2:02:57.

Last year, Wanjiru was fourth in the Prague Marathon after clocking 2:09:00 and later won the Amsterdam Marathon in a course record and personal best 2:05:21 in October.

He started running and training while in Mutitu High School and after graduating in 2008, he continued with serious training before running his first international race, a half marathon in Austria in 2011, which he won.

“After winning in Austria, I knew I had the talent to run and it gave me a lot of motivation and made me train harder, landing position seven in the Frankfurt Marathon in 2014,” narrates Wanjiru, who has concentrated his training in Embu and Kirinyaga, areas he says have good conditions for training.

“I have been training in Embu and Kirinyaga, areas I compare to Iten. These areas are near Mt Kenya and the altitude is perfect for athletics,” said Wanjiru, who will face Ethiopia’s Kenenisa Bekele – who boasts an impressive PB of 2:03:03, Tsefaye Abera (2:04:24) and Feyisa Lilesa (2:04:52).

His compatriot and former two-time world champion Kirui is listed as the fourth fastest in the field with 2:05:04, ahead of Wanjiru who has a personal best of 2:05:21. Kenya’s World Half Marathon Championships silver Bedan Karoki will be debuting in the race.

In the women’s division, former London Marathon champion Mary Keitany (2:18:37) will be teaming up with Florence Kiplagat (2:19:44), Hela Kiprop (2:21:27) and Vivian Cheruiyot who will be debuting.

Mark the name Daniel Wanjiru in London Marathon Reviewed by samrack on April 22, 2017 .

Daniel Wanjiru of Kenya celebrates while crossing the finish line to win the Amsterdam Marathon in Amsterdam, Netherlands, on October 16, 2016. PHOTO | OLAF KRAAK |  AFP Mark the name Daniel Wanjiru in London Marathon The big boys had the ritualistic, pre-London Marathon photo shoot on Friday at the iconic Tower Bridge. Yes, they