Mandela ‘was secretly treated in Kenya in 1990’ 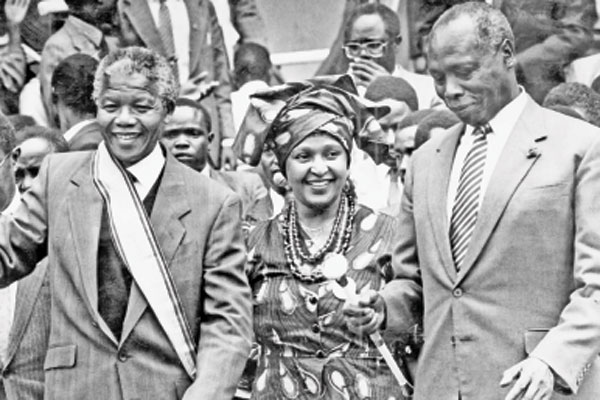 Mandela ‘was secretly treated in Kenya in 1990’

South African freedom icon Nelson Mandela, who died in December 2013, was secretly treated in Kenya in 1990 soon after he was released from the Robben Island jail, Mr Kalonzo Musyoka writes in his book.

Mr Mandela, he writes, was on an official trip to Addis Ababa, Ethiopia, when he was taken ill and flown to Nairobi where he was treated by President Daniel arap Moi’s personal doctor.

Mr Musyoka writes: “I first met Mandela in dramatic circumstances in 1990. I was then Deputy Speaker of the National Assembly. He had just been released from prison in April that year. I had gone to State House for a meeting with Moi. Before we could even start our meeting, Moi received information that was rather urgent. He told me: ‘Forget the meeting. Mandela is very sick, he is coming and I don’t want any media or cameras. We must organise for his hospitalisation’.”

“The icon had been taken ill while on a visit to Addis Ababa. We sped to Jomo Kenyatta Airport with Moi. I was driving behind his small convoy. There was no fanfare; nothing special; no song and dance. No journalists and photographers. It was just Moi, the medical staff and I.

“There was a stretcher and other medical equipment in an ambulance. I expected to see Mandela wheeled out of the plane. To our surprise, he walked out of his plane; tall, majestic but looking frail. He was escorted to the Nairobi Hospital where he was attended to by Moi’s personal physician, Dr David Silverstein. He did not stay at the hospital for long. I think Dr Silverstein just attended to him and monitored him overnight. The following day, he was driven back to the airport and flew back to South Africa. Once again, there was no fanfare.

“Later in July, Mandela returned to Kenya with his wife Winnie. This time it was an official visit. One of the events Mandela was involved in was laying a wreath at the mausoleum of Kenya’s founding father, Mzee Jomo Kenyatta, at Parliament. I recall him joyfully pointing at me while saying: ‘You, I remember you.’ He was referring to the Nairobi Hospital incident.”