Love in the air: Elderly Nyeri couple says ‘I do’ after 63 years 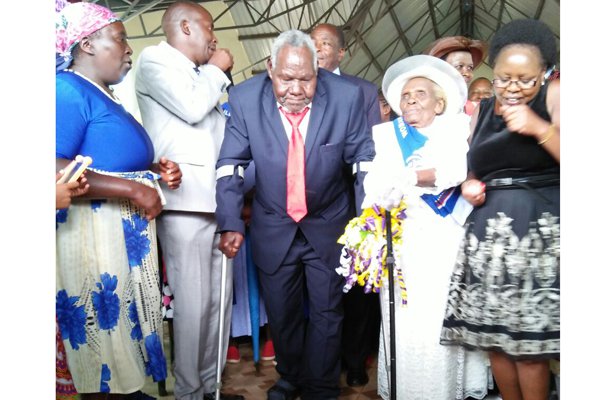 Love in the air: Elderly Nyeri couple says ‘I do’ after 63 years

A near century-old couple exchanged vows in Nyeri on Saturday in a colourful event.

With few teeth left in their mouths, 94-year-old Jackson Muriuki and his wife Agnes Njeri, 93, pledged to love, to hold and to cherish each other until death separates them.

The couple walked down the aisle of Gachika PCEA Church in Nyeri after 63 years of marriage. They got married in 1954 in a traditional ceremony in line with the Kikuyu customs.

Roughly 200 guests attended the wedding – the highlight of the day at Kiganjo Village.

To Njeri it was life-time desire and her happiness was evident as she smiled through the entire wedding service and reception.

Throughout the ceremony, she touched Muriuki’s face and gently fondled his hands with a satisfied look on her face.

At the reception the couple fed each other and giggled as they celebrated their wedding, surrounded by their more than 21 grandchildren and several great grandchildren.

With them was the best wedding couple Zacharia Githinji and Grace Waithiegeni.

When it came to dancing the couple did not disappoint as they swayed side-by-side while holding each other’s hands, amid ululations and cheers from the guests.

The wedding was presided over by Reverend Ignatious Kang’ang’i Gitonga, who said the elderly couple’s move was a lesson to young couples and youths that “you can love your spouse genuinely”.

When asked why he had taken more than half a century to walk his wife down the aisle, Muriuki said he first wanted to educate all his children and ensure they achieve their dreams before putting money aside for a wedding.

“I supported my children’s education and now they are learned people and they have in turn funded the wedding,” he said.

All his children have academic degrees in various fields, including medicine, business and agriculture.

Muriuki advised young men to marry and protect their wives, and respect their marriages. He also urged couples who have not formalised their unions to do so.

Their daughter Dr Jennifer Muriuki said the couple got married in 1954 and were had their first born in the same year. They had 10 more children.

“They have been aspiring to have a church wedding and as their children we could not block their wishes. We facilitated and financed everything so that they could realise their dreams. They also insisted that it should be in church,” said Dr Muriuki.

She added that the couple also wanted to be allowed to receive the Holy Communion in church – they could not do so before solemnising their marriage.

“We started planning the event early this year and they agreed [to it]. They are friends and very supportive of each other. We have never seen them engaging in violence or quarrelling,” said Dr Muriuki.

A guest, Joyce Wanjiku Kairu, who is the director of Purity Elderly Care Foundation (PECF), urged residents to take care of their old parents and relatives. She said many old people are neglected.

“It is the festive season and we usually see people in posh cars visiting their parents with packed shopping, dropping it off and leaving for their holiday destinations. The old parents need attention and to spend time with their children,” said Ms Kairu.

Love in the air: Elderly Nyeri couple says ‘I do’ after 63 years A near century-old couple exchanged vows in Nyeri on Saturday in a colourful event. With few teeth left in their mouths, 94-year-old Jackson Muriuki and his wife Agnes Njeri, 93, pledged to love, to hold and to cherish each other until death