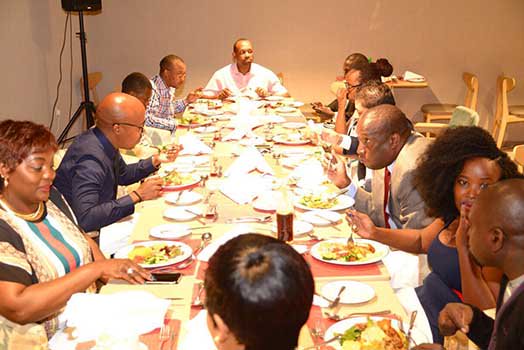 Members of #sisiWaKenya initiative during a consultative meeting at a Nairobi hotel.

A lobby group has urged Kenyans to wear white t-shirts on Wednesday and Thursday as a peace sign during the election period.

George Njoroge of the #sisiWaKenya initiative said the group’s agenda entails pushing for an inclusive Kenya.

He said the group will be mobilizing Kenyans of goodwill to wear white shirts and t-shirts on Wednesday and Thursday (election day) “that identifies him/her with every other Kenyan signifying that we are tribe-less and united as one to say no to political hostage”.

George Njoroge makes a point during the meeting.

“The script is to build up on a platform that is tone deaf but sends a message about a dream of an inclusive Kenya where people hear and see one another as people who can be great,” he said.

The group brings together top CEOs, sportsmen, celebrities and Kenyans from all walks of life.

“Kenya is the only Home we have, We have only one home that is Kenya, we have no spare home and therefore we should selfishly guard it. Elections happen after every five years in Kenya. We only choose a few people. We should therefore not allow a process that takes only a few weeks to derail lives of millions of Kenyans for the next four and a half years. We shall not allow elections to divide us.”

The group is also pushing for unity even after Elections by urging Kenyans to go back to work on October 27 to build the nation.

“Kenyans will aim at building a flourishing economy that will offer both young and old an opportunity to explore our untapped potential and together move this country towards the very much desired economic independence,” he added.

Singer Wahu was also in attendance.

The group also pushes the belief that the people of Kenya are supreme, believes in creating a Kenya where everyone has a chance at life and seeks to create a country that has strict adherence to laws and equal application of the laws to every citizen.

The group will push its agenda on both mainstream and social media under the hashtag #sisiWaKenya.

The group met last weekend at a Nairobi hotel for a consultative meeting.

Members of #sisiWaKenya initiative during a consultative meeting at a Nairobi hotel. LOBBY GROUP URGES KENYANS TO WEAR WHITE T-SHIRTS ON ELECTION DAY A lobby group has urged Kenyans to wear white t-shirts on Wednesday and Thursday as a peace sign during the election period. George Njoroge of the #sisiWaKenya initiative said the group’s agenda