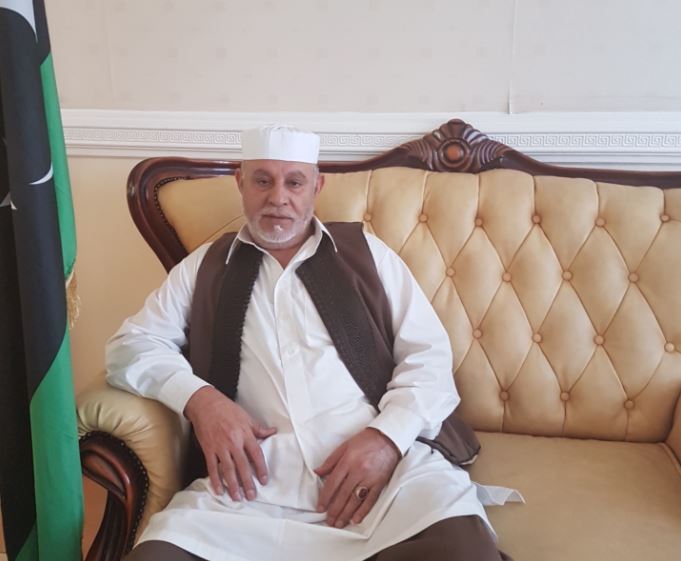 The Embassy of Libya to Kenya Chargé d’ Affaires Mr. Mabruk Daia at his office in Nairobi Pic/Photo Courtesy

The Libyan embassy in Kenya has said that the Libyan people or government should not be unfairly blamed following media reports of migrants allegedly being sold as slaves in the country and instead called for international help to tackle the problem. The embassy’s Chargé d’ Affaires Mr. Mabruk Daia has said that organised transnational criminal gangs have taken advantage of political instability and insecurity in Libya and its long and porous borders to run human trafficking and illegal immigration syndicates to Europe, leaving migrants vulnerable to abuse and exploitation at their hands. ALSO READ: Put upbeat about Stars chances despite barren draw against Libya The envoy’s comments come barely a week after Kenya’s Standard newspaper published a story suggesting that a number of Kenyans migrants in Libya could have been part of those allegedly sold as slaves in the North African country sparking outrage among Kenyans. It followed the broadcast by a western media outlet of a video it claimed to show African migrants and refugees being offered for sale to do manual labour for Sh40,000 (US$400) outside the capital Tripoli. Mr. Daia said that investigations into the matter by Libyan authorities are currently ongoing to establish if the reports of slave auctions are indeed true and to prosecute and punish the people behind those crimes. “The Libyan people and government stand firmly against such inhuman practices which are incompatible with our values and laws.Any practices recorded against migrants are nothing more than individual practices by criminals,” he said quoting statements from the country’s Foreign and Justice Ministries. The envoy said Libyan UN-recognised government needs technical and logistical support to exercise its authority in all parts of the country, control its borders, provide humanitarian assistance to illegal migrants held in detention centres in the country and help them return home safely. “Despite Libya’s political, economic and security conditions, it bears the brunt of rescuing migrants in its territorial waters, sheltering them, providing health care and essential needs, and deporting them at its own expense with very limited support from the international community,” he said. Since reports of slave auctions emerged recently, Libya has faced criticis with demonstrations reported outside some Libyan embassies in Europe while some countries including Burkina Faso have recalled their envoys from Libya in protest. Its international image has been battered by the reports. The Libyan representative expressed regret that Libya has been wrongly portrayed as racist and anti-African, saying the country has in fact opened its doors to more than 2 million expatriate workers from African countries working and living there legally and in dignity. ALSO READ: Global outcry over slavery in Libya He added that Libya’s has for many years pursued a policy of closer political, economic and cultural ties with the rest of African countries. He said Libya has investments of over US$10 billion (Sh1 trillion) in African countries. “Libya also many indigenous citizens who are of African descent and they enjoy freedom and equality like the rest of Libyans. Many of them are visible in the highest positions of government, academia, business and arts. Libya does not need lessons in morality and humanity,” he said. The envoy clarified that the Libyan embassy in Nairobi does not issue visas to Kenyans, especially unskilled persons, seeking to travel to Libya till they are vetted by Kenya’s foreign Ministry and issued with an approval letter. “As a result of this strict requirement, many Kenyans seeking visas to Libya have been turned away in order to minimise risks of them joining or falling victim to criminal groups or being trafficked across the Mediterranean to Europe,” he said. The envoy said that the Libyan government took the initiative many years ago as stated in the 2006 Tripoli joint declaration, to call for effective policies to tackle illegal immigration and human trafficking including providing support for institutional capacity building and development projects in source countries. Libya fell into political turmoil after the fall of former leader Muammar Gaddafi in 2011 and the country has been carved up among rival groups though the international community recognises a National Accord government based in Tripoli. Libya is a signatory to the United Nations Convention on Transnational Organised Crimes (UNTOC) and the protocols against human trafficking. Its penal code of 1958 criminalised slavery. A draft law against human trafficking is currently before Libya’s legislative authorities for enactment into law. ALSO READ: Eto’o denies having sponsored a plane to airlift returnees It is believed that between 400,000 and a million illegal migrants from other parts of Africa are in Libya seeking to cross to Europe in search of better economic opportunities or escape armed conflicts.

Share thisFacebookTwitterPinterestEmailWhatsAppThe Embassy of Libya to Kenya Chargé d’ Affaires Mr. Mabruk Daia at his office in Nairobi Pic/Photo Courtesy Libyan embassy in Kenya reacts to slave trade reports The Libyan embassy in Kenya has said that the Libyan people or government should not be unfairly blamed following media reports of migrants allegedly being sold