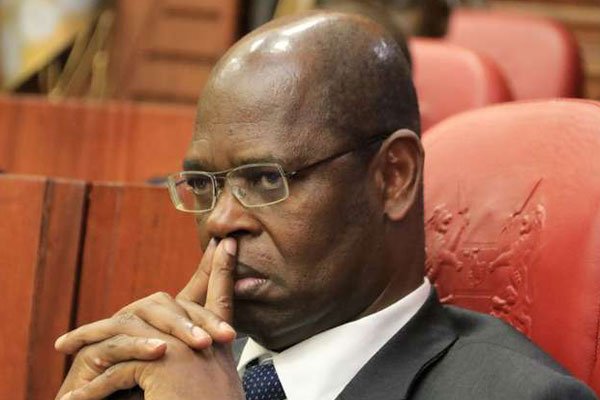 This comes just a day after a National Assembly’s Justice and Legal Affairs Committee recommended his removal from office.

On Tuesday, after the committee proposed that President Uhuru Kenyatta form a a tribunal to investigate him, Mr Kinisu said: “I have not read the report and cannot say anything about it. In the circumstances, you take things day by day.”

In his resignation letter to the President, Mr Kinisu said there had been adverse reporting of matters related to him and a business his family owned and that the State was using significant resources on the matter that could be used to fight corruption.

“Therefore, to ensure that due attention is paid to the fight against corruption, I have today tendered to his Excellency the President my resignation as Chairman of EACC. By this measure, I believe that EACC will henceforth be able to focus on carrying out its mandate,” he said.

He maintained that he and his family’s company were innocent of all allegations.

Earlier, he had told a parliamentary committee that he left Esaki Ltd, the company awarded National Youth Service (NYS) contracts, in 2008.

He produced documents showing he had resigned from Esaki Ltd, which is run by his wife, long before the company won the NYS contracts.

The anti-graft agency’s commissioners also piled pressure on Mr Kinisu to leave office, urging him to take personal responsibility over Esaki’s dealings with the NYS.

They warned that Mr Kinisu faced imminent suspension unless he voluntarily stepped aside to pave the way for investigations.

“By virtue of his office and his relationship with Esaki Ltd, the chairperson’s personal interests are in apparent conflict with those of the public in respect of the subject investigations,” the commissioners said.

On July 27 this year, the Nation reported that Esaki Ltd was issued a licence by the Pest Control Products Board on March 23, 2015, a day before the Health ministry opened tenders for the supply of insecticides to the malaria control unit.

Esaki Ltd won the Sh150 million tender and the contract was awarded on April 24.

Documents seen by the Nation showed that Esaki Ltd delivered 25,728 bottles of insecticide for both orders in two batches on August 10, 2015.

Kinisu bows to pressure, resigns as EACC chairman Reviewed by samrack on August 31, 2016 .

Share thisFacebookTwitterPinterestEmailWhatsAppKinisu bows to pressure, resigns as EACC chairman Ethics and Anti-Corruption Commission (EACC) chairman Philip Kinisu has bowed to pressure and resigned. This comes just a day after a National Assembly’s Justice and Legal Affairs Committee recommended his removal from office. On Tuesday, after the committee proposed that President Uhuru Kenyatta form a a