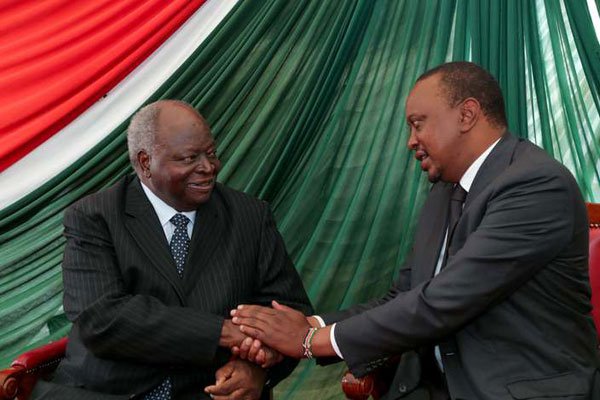 Retired President Mwai Kibaki was on Sunday afternoon flown to South Africa for specialised treatment after he was taken ill over the weekend and rushed to Karen Hospital in Nairobi.

Government officials and his family were guarded with information on the former President’s health, but the Daily Nation learnt that Mr Kibaki was wheeled into the hospital’s emergency unit on Saturday night at around 9pm.

On Sunday, it was feared that Mr Kibaki, 84, may have suffered a stroke, although there was no confirmation by either family or hospital.

Mr Kibaki enjoyed good health most of his adult life and was a well known golfer and an almost permanent fixture in the country club circuit until a 2012 car accident.

He has been in uncertain health since the accident and is believed to have suffered a stroke early in 2003. He made remarkable recovery, save for mild memory lapses and slight speech impairment, and successfully served 10 years as President, including gruelling campaigns and dealing with national crises.

In the 1970s and ’80s, when he was Finance and Planning minister, Mr Kibaki, whose brilliance in Economics was widely acknowledged, was famous for his prodigious memory and grasp of technical detail.

A former lecturer, Mr Kibaki was notable in youth for his capacity to speak almost exclusive without notes, but as President he painfully laboured through written speeches on national days. An intensely private and stoic man, it is not known outside a tight family circle what effect the April death of his wife of 54 years, Mrs Lucy Kibaki, had on Mr Kibaki’s already uncertain health.

The retired President has kept up a schedule of public service as Unesco Special Envoy for Water.

On Sunday, hospital staff told the Nation that Mr Kibaki was treated on Saturday and discharged yesterday after the family decided he would be treated abroad and flew him out.

President Uhuru Kenyatta was among those who went to the hospital to visit his predecessor.

A statement from the Presidency said Mr Kibaki was accompanied by his doctor to South Africa.

“We expect him to return soon, and Kenyans will be informed of his progress as appropriate,” said government spokesman Manoah Esipisu. “We ask Kenyans to pray for him, and to respect the privacy of the family at this difficult time.”

A source at Karen Hospital said the facility had been “very busy” since Mr Kibaki was wheeled in on Saturday night.

The hospital, one of the best in the country and reputed for its high-end patients registry, was founded by renowned cardiologists Dan Gikonyo and his wife Betty. Dr Gikonyo has been Mr Kibaki’s personal doctor and famously oversaw his recovery from the broken leg he suffered towards the end of the campaigns in December 2002.

According to the sources, who asked not to be named because they are not allowed to speak to the Press, Mr Kibaki was taken out of the hospital in an ambulance with police escort.

“The ambulance was between a police chase car, two Mercedes Benzes and two Toyota VXs,” said one of the sources.

Sources at the hospital said the former president has lately been “a frequent patient” there, mostly for “routine medical check-ups”.

Reporters also spotted the former President’s son, Jimmy Kibaki, at the hospital Sunday afternoon. He walked out at about 2.25pm and spoke to group of five men at the hospital’s parking lot.

There were five vehicles, three of them of the Mercedes model with regular plates as well as a chase car with a GK-number plates along uniformed police driver, presumably the team that drove the former President to hospital.

Retired Heads of State are entitled to a motorcade and protection.

Hospital security kept reporters away from the former President’s family and staff at the car park but promised a family statement at 4pm. However, the Nation was later asked by the hospital to leave the premises.

Former Heads of State usually enjoy perks of their former jobs, complete with a chase car and a motorcade financed by the State.

Mr Kibaki, who has kept a low profile since he retired in April 2013, was last seen in public last week when he met African diplomats at the Windsor Hotel.

Kibaki flown to South Africa after spending night in Karen Hospital Reviewed by samrack on August 21, 2016 .