Tecra, who was the daughter of Keroche Breweries billionaire owners Joseph Karanja (Chairman) and his wife Tabitha Karanja (CEO), was buried at her family’s home in Naivasha, Nakuru County on Saturday, May 16th. 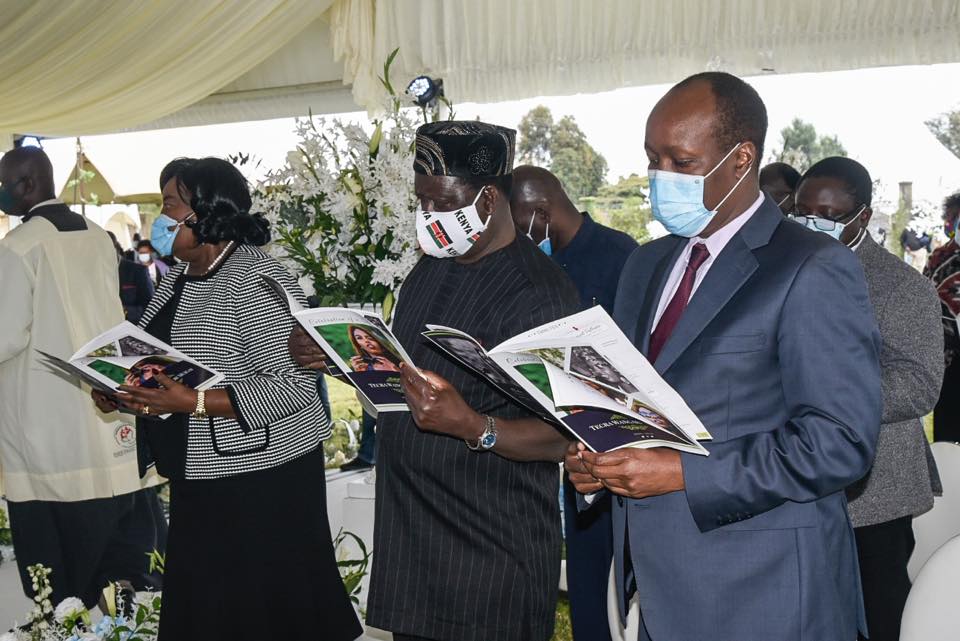 Tecra passed away while undergoing treatment at the Nairobi Hospital on May 2nd, a few days after she reportedly fell down the stairs at a holiday home in Lamu, where she was living with her boyfriend Omar Lali, 51.

A preliminary autopsy report by Chief Government Pathologist Dr. Johansen Oduor showed Tecra succumbed to injuries she suffered on the left side of her head. Oduor added that the injuries are consistent with a fall down the stairs.

Lali, who is being treated as a suspect in her death, was arrested by homicide detectives after he allegedly gave conflicting accounts on the circumstances leading to his girlfriend’s death.

A Lamu court allowed police to detain him for 21 days pending completion of investigations into the incident. The case will be mentioned on May 26th.

Lali has maintained innocence, saying he loved Tecra and did not have any reason to murder her. In an interview with The Standard, Lali stressed that her fall was purely an accident.

“She wanted us to settle down. I helped her look for a house in Naivasha. But she is gone. Why would I kill her? Why won’t people accept God’s will? This girl was special. I will never find anyone like her again,” said Lali.

It is not clear whether Lali’s family, who had requested to attend the funeral, were present.

In a motherly move, Tabitha Karanja airlifted her daughter to the Nairobi hospital. Tecra was in ICU for a week before she succumbed and lost her life.

The Karanjas showed their love through a local newspaper tribute.

” IT IS WITH DEEP AND PROFOUND SORROW THAT WE ACCEPT THE TRAGIC AND UNTIMELY DEATH OF TECRA WANGARI MUIGAI THAT OCCURRED ON 2 MAY 2020 AT THE NAIROBI HOSPITAL. THE LATE TECRA WAS A DYNAMIC, CREATIVE, AND EMPATHETIC LEADER WHO TOUCHED MANY LIVES. SHE WAS ALSO AN ICONIC, TRANSFORMATIONAL  THINKER, INTELLECTUAL, AND A BRILLIANT PHILOSOPHER.”

The family acknowledged that Tecra was patriotic and loved serving people.

“SHE WAS PASSIONATE ABOUT HER COUNTRY KENYA AND ITS PEOPLE AND ALWAYS ADVOCATED FOR EQUAL OPPORTUNITIES FOR EVERYONE.”

Rest with the angels

The family paid tribute to Tecra, praying to God to shine His light on her as she rests in peace.

“THE LORD GIVES AND THE LORD TAKETH. IN GOD’S HANDS, YOU REST SURROUNDED BY ANGELS. IN OUR HEARTS, YOU WILL LIVE FOREVER. ETERNAL REST GRANT UNTO HER OH LORD. AND LET PERPETUAL LIGHT SHINE UPON HER. MAY YOU REST IN PEACE. AMEN.”

The Karanjas held a private funeral for their daughter Tecra. The occasion was, however, graced by dignitaries, including Nairobi women representative Esther Passaris and Nakuru governor Lee Kinyanjui.

Here are some of the photos from Tecra’s burial.