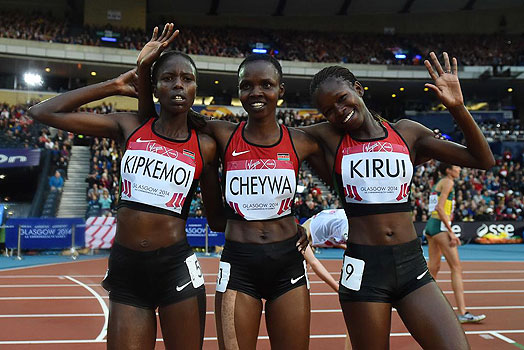 Kenya might have tossed to winning the overall title during World Cross Country Championships in Kampala, but not for the 2013 World 3,000m steeplechase champion Milcah Chemos, who had gone to cheer the team.

Chemos, who is the Athletics Kenya Athletes representative, lost her Samsung Alpha phone worth Sh 50,000 and unspecified amount of money to thieves when she was cheering Kenya’s junior women’s team on Sunday.

“I was in a crowd cheering Cellphine Chespol to tighten her steps to beat her Ethiopian rival who was in front when I realised something was wrong with my handbag,” said Chemos, adding that she noticed some boys running away and her efforts to alert the officers who were nearby proved futile.

‘JUST LOOKED AT ME’

“They (police officers) just looked at me saying there is nothing they could do with some laughing,” explained Chemos, who opted to watch all the races before she went to report.

“They only offered to direct me to a post where they took ages to take my statement.”

Ironically, Chemos is awaiting promotion to the rank of chief inspector of Police in the National Police Service.

Chemos, the 2009 Berlin and 2011 Daegu World 3,000m steeplechase silver medalist, said that her efforts stopped when the officers told her that they could only make further follow up after she secured a sworn affidavit from the courts.

“Kampala… Kampala!…will never come back to this town again,” said Chemos on her facebook status.

“Imagine cheering your team and one is busy stealing your phone and money.”

But Chemos, who is also the 2010 Commonwealth champion, is glad that her husband Alex Sang, who had accompanied her to Uganda, bought her another phone.

“Otherwise God is always on our side since we won in the end, beating the Ugandans. Congratulations to Team Kenya,’ said Chemos.

“Let’s all pray for these thieves in Kampala to change and do some other jobs.”

Kenyan athlete Milcah Chemos Cheywa (center). PHOTO | FILE KENYA’S TOP ATHLETE ROBBED IN UGANDA AS RUDE OFFICERS WATCHED Kenya might have tossed to winning the overall title during World Cross Country Championships in Kampala, but not for the 2013 World 3,000m steeplechase champion Milcah Chemos, who had gone to cheer the team. Chemos, who