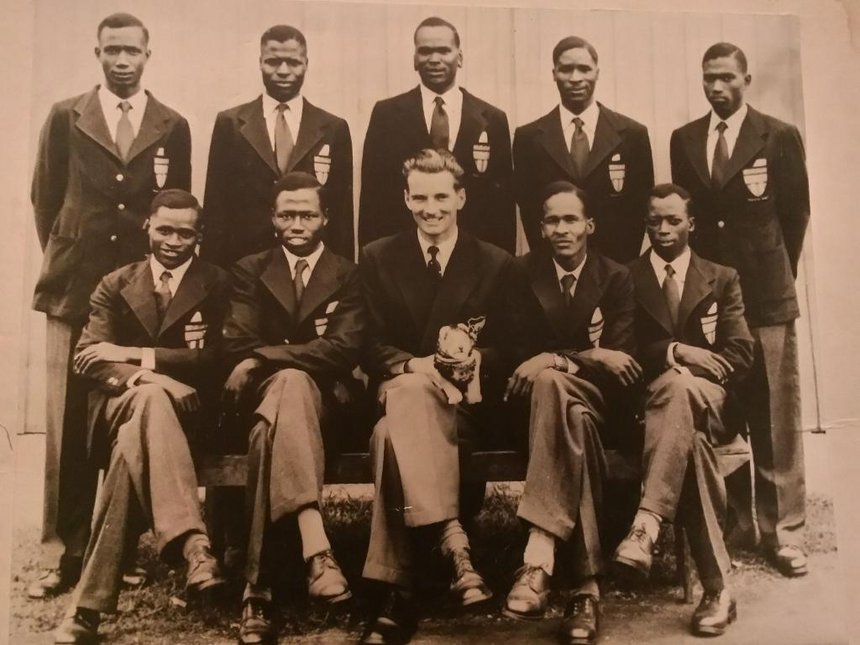 The Olympics are upon us once more. Kenya is taking part in the XXXI (31st) Olympiad against the background of doping allegations and the question of the banning of Russian athletes on similar issues. Kenya took part in its first Olympics in 1956. Some of Kenya’s athletes who took part in those games, ran barefoot and had probably never heard that one could take drugs to enhance performance. Most of them had not travelled further than their villages and were seeing a plane for the very first time. It is now 60 years since eight Kenyan Olympians travelled to Melbourne, Australia to attend the XVI (16th) Olympiad.

This was Kenya’s second participation in a major international sporting event. Earlier in 1954, a nine-man team travelled to Vancouver, Canada to take part in the Commonwealth Games then known as the British Empire Games. The team included Korigo Barno, Nyandika Maiyoro, Maboria Tesot, Kiprono Maritim, Musembi Mbathi, Kiptalam Keter, Jonathan Lenemeria, Lazaro Chepkwony and Paul Kipkorir Boit who was the Team Captain. They were led by the legendary Archie Evans who had served as the ‘Colony Sports Officer’ since 1947. If Kenya today is an athletics powerhouse, it owes much to Archie Evans who worked hard to develop athletics from his base at the Jeanes School Kabete (now part of Kenya School of Government).

A native of the Lakes district in northern England, Evans first came to Kenya in 1945 after being discharged from the British Army after the war. He immediately fell in love with Kenya and chose to stay. His deep love for sports saw him appointed the Colony Sports Officer in 1947 and co-founded the Kenya Amateur Athletics Association (KAAA) in 1951. He served as its first secretary and had it affiliated it with the IAAF. Evans coached Kenya athletics team which succeeded in East Africa championships several years in a row. He also took the team to regional championships such as the Indian Ocean Games in Tananarife, Malagasy (Antananarivo, Madagascar) in August 1952 and the Rhodes Centenary Games in Kitwe (Northern Rhodesia) in July 1953. In August that year, his team took part in the Central African Games in Ndola (also Northern Rhodesia or today Zambia).

In all these, Kenya became top with Kenyans breaking nearly all the regional records. Following the impressive performance, Evans put his energy on developing a team that would take part in the Empire Games to be held in Vancouver, Canada. Going to Canada in those days was much more challenging than it is today. They flew to London, had a brief stop before taking another flight to the United States then on to Canada. Even though Kenya was already proving strong in

the track events, Evans entered a balanced team – six in track events and three were in field events which included high jump and javelin. In that team, only two are still alive – Lazaro Chepkwony (who ran the 3 miles and 6 miles) and Nyandika Maiyoro (who ran the 6 miles). The two events have since been replaced by the 5,000 metres and 10,000 metres respectively. Lazaro Chepkwony holds the distinction as the first Kenyan athlete to compete in an international event. He earned the title after he competed in the 6 miles (10000m) in London’s White City Stadium on July 9, 1954 against an all-white team. During the race, he angered sports commentators by his unorthodox running style leading the pack through much of the race and tiring many of the competitors only to drop out on the 15th lap. The rest of the Kenya team registered impressive performances in the same stadium in London before proceeding to Vancouver where they met the same British Athletes they had competed against. One of them was Roger Bannister who beat Kiptalam Keter and broke the world record on the One Mile running under 4 minutes. The Kenyans never won any medal but most of them broke regional and national records. Going into Vancouver, there was great apprehension that the Kenyan athletes would face racial discrimination. The games went well with no significant challenges faced. Kenya was one of twenty-five teams that participating. The other African teams were Gold Coast (Ghana), Nigeria and Uganda. While Kenya returned with no medal, Uganda posted its first international medal when Patrick Etolu won a silver in High Jump. In that team, Musembi Mbathi went to America to study and returned to join the civil service and also became a sports administrator. Team Captain Paul Boit went to Oxford and returned to become Kenya’s first African Provincial Commissioner in 1964.

In 1956, Paul’s younger brother Sila Kibet Boit became the Captain of the first Olympics team. Sila Boit, a 440 and 880 yards national/regional champion, led the first Olympics team to Melbourne together with Evans. The only member from the Vancouver Games to go to Melbourne was Kiptalam Keter who had posted excellent times in the 440 yards and the 880 yards (equivalent today to 400m and 800m). The other team members included Arere Anentia, Joseph Leresae, Wanyoike Kamau, Kanuti Sum. The team faced insurmountable challenges going to Melbourne. They did not have adequate funding which forced them to live lean. It helped that Derek Q. Erskine, a wealthy colonial businessman had been elected the President of the Kenya Amateur Athletics Association in 1951. He used his own money to finance the

teams that went to Vancouver and Melbourne. It was Erskine who also got Kenya membership of the International Olympic Committee in 1951 but it was too late to participate in the 1952 Olympics in Helsinki, Finland. Erskine and Evans must be commended for insisting on having an all-black Kenyan team representing Kenya in the games. South Africa and the two Rhodesias were represented by all-white teams thanks to their racist policies back at home.

The games were carried out against the background of the Cold War. Communist nations were eager to show their sporting prowess but at the end of the games many of their athletes defected to the West. All the Kenyan athletes returned home.

In the 1960 Olympics in Rome, mistakes and severe underfunding was to haunt the Team Kenya. The new kids were the 100m sensation Seraphino Antao and Bartonjo Rotich both of whom had participated in the 1958 Empire Games in Cardiff, Wales. Medals proved elusive for the Kenya team in 1960 but this was to end when Kenya bagged a bronze medal in 1964 during the Tokyo games when Wilson Kiprugut powered past a strong team to end Kenya’s medal drought. In the next Olympic games held in Mexico City in 1968, Kenya was to bag its first ever gold medal when Naftali Temu won the 10,000m. Shortly afterwards, the second gold medal came from schoolboy Amos Biwott won the 3000m steeplechase. The third gold came from the legendary Kipchoge Keino in the 1500m. In total, Kenya won 9 medals – 3 gold, 4 silver medals and 2 bronze medals. In Munich 1972 Kenya equalled the same number of medals with 2 gold, three silver and 4 bronze medals. This was the first and only time a Kenya relay team would win a gold medal. The other gold medal came from Kipchoge Keino.

African nations decided to boycott the Montreal games in 1976 to protest the participation of apartheid South Africa. Again Kenya proved a great ally of the United States which led the boycott of the 1980 Moscow Olympics to protest the Soviet invasion of Afghanistan. The two events ended the athletics careers of so many promising Kenyan athletes such as gold medallist Amos Biwott who was forced to find low-level employment to survive. Since then, Kenya has not boycotted any other Olympiad. Kenya’s best games ever remains Beijing 2008 where she bagged 6 gold medals. To this day, Kenya has won a total of 25 gold medals, 32 silver medals and 29 bronze medals bringing Kenya’s total medal haul to 86. We hope to extend the lead in Rio.

Kenya today is easily the world’s most successful athletics nation with its men and women holding more world outdoor records than any other country on earth. Virtually all the 86 Olympic medals have been in athletics with the exception of seven that were earned in Boxing

Godfrey Sang and Ken Boit are the authors of an upcoming book:  The Kenyan Running Legends – A History of Athletics in Kenya 1922-1972

Kenya’s journey 60 years on The Olympics are upon us once more. Kenya is taking part in the XXXI (31st) Olympiad against the background of doping allegations and the question of the banning of Russian athletes on similar issues. Kenya took part in its first Olympics in 1956. Some of Kenya’s athletes who took part