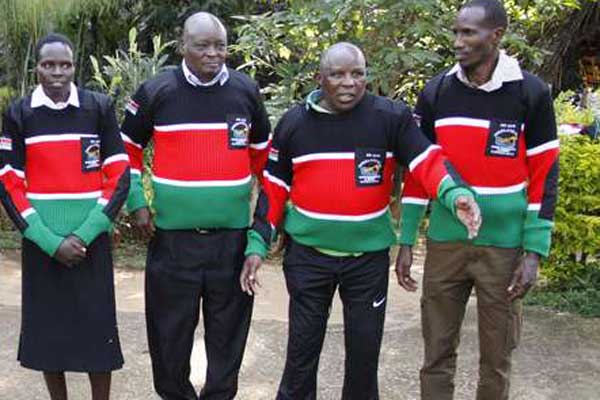 The manager of the Kenyan Olympic athletics team Michael Rotich (2nd left) during a visit at Naiberi Campsite and Resort in Uasin Gishu County on July 27, 2016, where the Olympics marathon team was camping for their training. Rotich has been recalled from the Rio Games after an investigation alleged he demanded money to give warnings about doping tests, a media report said. PHOTO | JARED NYATAYA | NATION MEDIA GROUP

The manager of the Kenyan Olympic athletics team Michael Rotich has been recalled from the Rio Games after an investigation alleged he demanded money to give warnings about doping tests, a media report said.

The investigation by the Sunday Times newspaper and German television channel ARD into Mr Rotich is a potential new blow to Kenya’s sporting reputation after doping accusations in recent months.

Rotich was filmed by the two media demanding 10,000 pounds (Sh1.3 million) for agreeing to warn a British coach about imminent doping tests.

ARD journalist Hajo Seppelt tweeted an Athletics Kenya statement saying Rotich had been recalled “so we can investigate further his role in this.”

“These are very serious allegations and we cannot have someone of that character managing our team.”

The statement said the case could be referred to Kenyan police.

Rotich introduced reporters purporting to be the coach and an agent of athletes to Paul and Liz Scott, who are official anti-doping testers in Kenya.

The retired school teacher work for a Swedish-based company which has the IAAF contract for dope testing in Kenya.

There was no suggestion of misconduct against them. The company said Rotich was not one of their business contacts.

“He loves money. So, if you know somebody’s weakness, it is easier to work with him,” Mwangi, who had agreed to procure blood doping EPO for the fictitious British group, was quoted as saying.

Rotich reportedly told a Sunday Times reporter he would try to work out the easiest way the purported coach’s athletes could avoid being tested.

Asked whether he would warn Mwangi of imminent tests, he answered: “Yeah I will tell him. Any time, any time.”

At another meeting the next day, over champagne, the demand for the money was made, the report said.

“Ten (thousand pounds) would be a round figure just for the whole thing,” Rotich was quoted as saying.

For the money, Rotich said he would give Mwangi 12 hours warning of doping tests and suggested how athletes could explain their absence if they felt they had not had enough time to rid their body of blood doping EPO.

“I mean some of those compassionate ones like you had a sick child and you… slept in the hospital or something,” said Rotich.

He also suggested saying that the sudden illness of a close relative had compelled the athlete to go away.

When he left for Rio, Rotich told the media: “We have counselled, taught and even asked them to be cautious about doping. We want to show the world our bid for clean sport.”

When confronted by the Sunday Times, Rotich claimed he had gone along with the plan as he was investigating Mwangi and the reporter.

“There were a lot of white people… who were actually moving drugs and doing all those things. So this was an opportunity,” he told the reporter.

The government only this week passed anti-doping legislation so that the World Anti-Doping Agency could take Kenya off its non-compliant list.

Share thisFacebookTwitterPinterestEmailWhatsAppThe manager of the Kenyan Olympic athletics team Michael Rotich (2nd left) during a visit at Naiberi Campsite and Resort in Uasin Gishu County on July 27, 2016, where the Olympics marathon team was camping for their training. Rotich has been recalled from the Rio Games after an investigation alleged he demanded money to