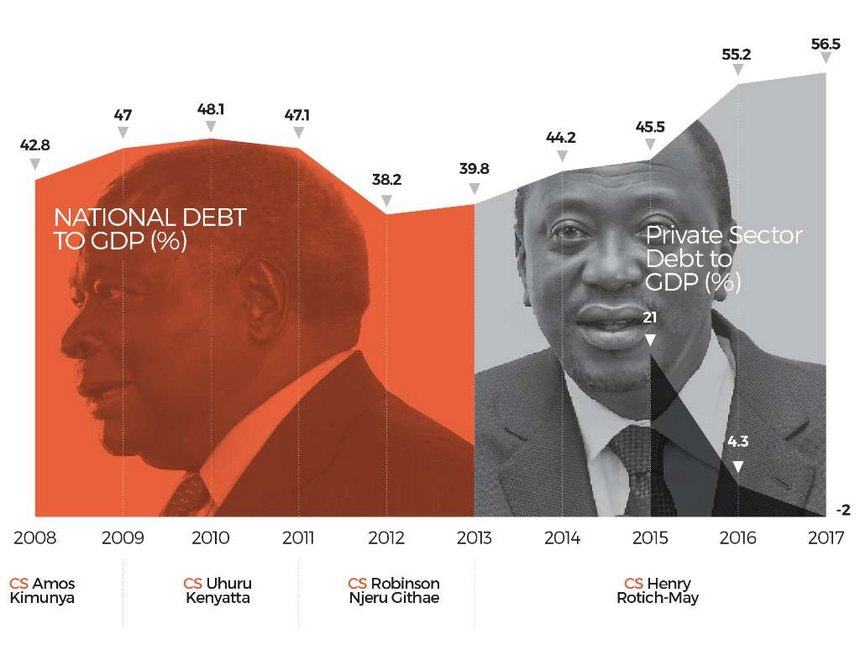 Each and every Kenyan needs to pay at least Sh100,000 in order to clear the country’s mushrooming public debt that reached Sh4.58 trillion in November.

Latest data by the Central Bank of Kenya record the government’s internal debt at Sh2.22 trillion in November last year, while the external debt stood at Sh2.31 trillion in September 2017.

An analysis of Kenya’s public debt reveals that the government borrowed an average of Sh62.7 billion per month last year, compared to Sh54 billion in 2016 and Sh55 billion the previous year. The public debt moved from Sh3.89 trillion in January last year to reach Sh4.58 trillion in November, meaning that a total of Sh690 billion was borrowed during the period.

This is Sh110 billion more compared to the same period in 2016, when the government borrowed Sh580 billion. Pundits have it that the debt could be more, considering that guaranteed loans and borrowings of state agencies running into hundreds of billions in Kenya shillings has not been factored in.

Yet, the debt is expected to swell further this year, with the 2017 Budget Review and Outlook (BROP) report released in September last year indicating that Kenya’s debt-to-GDP ratio is expected to rise to 59 per cent in 2018/2019, up from the current 57 per cent, due to upcoming infrastructure projects and an expected drop in revenue collection due to a myriad of microeconomics experienced in the country last year.

WHERE DID THE MONEY GO?

Kenya has borrowed heavily in the past 10 years to fund its infrastructure. Even so, the Standard Gauge Railway, expected to sink the country into at least $10 billion (Sh1 trillion) debt from China stands out, considering that it accounts for at least 22 per cent of Kenya’s total public debt.

In the first phase of the SGR that saw the railway line move from Mombasa to Nairobi, Chinese banks and the government lent Kenya Sh327 billion for the 472-kilometre stretch and a further Sh150 billion to push it to Naivasha.

In May last year, President Uhuru Kenyatta led the Kenyan delegation in making a formal request for an additional $3.59 billion (Sh370 billion) from Exim Bank of China to finance the construction of the third phase of the SGR, a 270km-line between Naivasha and Kisumu, bringing the total loan from the economic heavyweight from the East to more than Sh850 billion.

China is also playing a major role in funding other infrastructural projects like geothermal energy, having embarked on a 30-year investment for Olkaria IV, the geothermal power project, to the tune of Sh100 billion in November 2016.

China is also funding construction of major roads in the country.

This perhaps explains why Beijing led another 14 countries that advanced bilateral loans to Kenya in 12 months to September last year. According to the National Treasury, Kenya received $4.7 billion (Sh487 billion) from China, compared to $879 million and $688 million from Japan and France respectively.

Even though bilateral loans are earmarked for development, critics led by the country’s opposition chief Raila Odinga have questioned the sustainability of some of the projects funded, key among them the SGR. Besides accusing the state of inflating the construction price of the railway line, Odinga argues that project may not repay the loan, forcing Kenyans to pay from their pockets.

Kwame Owino, Institute of Economic Affairs chief executive officer, is not worried that Kenya is borrowing too much to fund infrastructure. He is however concerned about the feasibility of the multiple projects being funded.

“The question is not how much loan we take, be it from China or not. We must however interrogate if those projects can repay the loan, while giving Kenyans value for money. The government should also be in place to address the sustainability aspect,” said Kwame.

Economic experts in February last year warned that the SGR will not repay its own loans and will require taxpayers to incur an extra Sh15 billion to service them, putting to question the feasibility of the largest single infrastructure project in Kenya in recent times.

In her recent blog, Anzetse Were, a development economist, insists that debt itself is not necessarily a problem. She explains that if used wisely, it can fund investment in activities and projects that catalyse economic development, GDP growth and growth in per capita incomes.

She is however quick to add that such debt becomes of concern when the pattern of debt accrual and servicing seems headed in an unsustainable direction.

“If expenditure is growing in the context of muted revenue generation, that creates momentum for more debt than can be adequately serviced. Further, if debt is not used efficiently and linked to increases in productivity and GDP growth, it also saddles countries with burdensome repayments,” said Anzetse.

“At the moment, Kenya is on the cusp where the government can either take decisive action to put the country on a better debt path, or continue with current trends that are edging the country closer to an unsustainable position.”

The agency is worried that Kenya’s debt-to-GDP ratio, which reached 56.4 per cent in June last year, will cross the 60 per cent mark by June this year, exerting more pressure on the Budget. This, Moody’s said, will lower Kenya’s attractiveness to creditors and investors.

Kenya has the highest debt-to-GDP ratio when compared to her East African neighbours. The International Monitory Fund estimates Uganda’s debt ratio to GDP at 36.9 per cent, while Tanzania is at 39 per cent due to its $19.1 billion public debt. Rwanda and Burundi have 37.6 and 47.2 per cent, respectively. Even so, Kenya is debt-to-GDP ranks below Cape Verde, Gambia, Mozambique, Egypt and Djibouti, who have 134, 116, 115, 97.1 and 84 per cent, respectively.

Last year, the IMF cautioned that Kenya’s rising debt levels need to be contained, to cushion the economy from unplanned shocks. The Fund’s representative to Kenya, Jan Mikkelsen, said that the country needs urgent policies to address its vulnerability to debt.

In 2016, the World Bank raised the red flag on Kenya’s debt, especially to China, saying that the borrowing is comes at a heightened cost to the taxpayer. In its research paper titled, “Deal or no deal, strictly business for China in Kenya?” the global lender said that Kenya still has a heavy debt burden and China’s loans can bring debt to unsustainable levels.

Treasury CS Henry Rotich in November dismissed Moody’s alert, saying that the country is far from debt distress, given the economic growth and the expected benefits from the investments the debt goes into.

He explained that Kenya’s debt is way below the Country Policy and Institutional Assessment (CPIA) index standards, which cap debt-to-GDP at 74 per cent. Rotich however fell short of explaining the consequences of the government borrowing to repay past facilities.

Late last year, announcing the extension to pay a $750 million (Sh75 billion) syndicated loan it took in 2015 by six months, the government hinted at floating a new Eurobond.

According to Rotich, 90 per cent of the investors in the loan had agreed to extend the maturity by six months until April 2018, while the remaining 10 per cent that did not want to extend were repaid on October 27.

The original Sh75 billion loan was syndicated to a group of 26 banks and arranged by Citigroup, Standard Bank and Standard Chartered. The loan was to address some of the interest rates pressures then and attracted a 5.7 per cent interest.

The extension means that Kenya will have to repay longer than expected, incurring more interest charges.

Kenyans owe Sh100,000 each in public debt Each and every Kenyan needs to pay at least Sh100,000 in order to clear the country’s mushrooming public debt that reached Sh4.58 trillion in November. Kenya recorded its highest public debt in 2017. Latest data by the Central Bank of Kenya record the government’s internal debt at Sh2.22