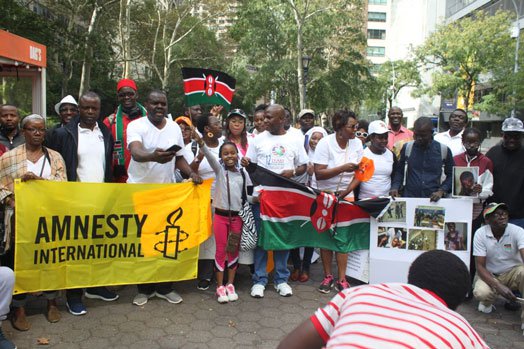 Some of the Kenyans living in the US who staged anti-IEBC demos outside the United Nations offices in New York. PHOTOS | COURTESY

Kenyans living in the United States have joined in demonstrations aimed at exerting pressure on the Independent Electoral and Boundaries Commission (IEBC) officials to quit office.

On Saturday, dozens of Kenyans protested outside the United Nations offices in New York.

They waved placards with anti-IEBC messages and chanted slogans such as ‘No reforms No elections’, ‘Chiloba Must Go’ and ‘Who Killed Msando.’

These protests come amid a similar exercise ongoing in Kenya, which is being spearheaded by the opposition National Super Alliance (Nasa).

The first of a planned series of these protests was witnessed on Tuesday last week in Nairobi and Kisumu.

Nasa presidential candidate Raila Odinga has now requested his supporters from all over the country to join in this week’s protests.

Nasa intends to use the protests to force the removal from office of some top IEBC officials before the repeat presidential election slated for October 26.

The opposition alliance have accused the said officials of bungling the August 8 general elections in favour of President Uhuru Kenyatta.