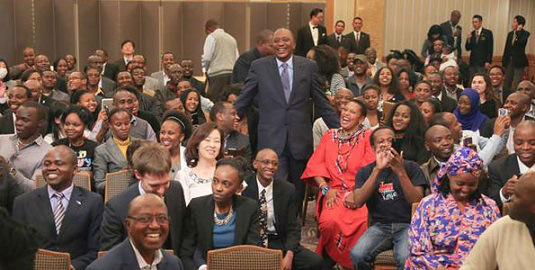 Kenyans living in Japan have set up an investment vehicle to pool together resources ahead of the government’s plan to float a diaspora bond next year.

To join the company, Kenyans in Japan have to pay a membership fee of Sh5,000 each and buy a maximum of two shares per person at a cost of Sh25,000 each.

The move to form an investment vehicle comes after President Uhuru Kenyatta visited Tokyo in March and asked Kenyans there to prepare for a diaspora bond to be floated in 2016.

“This bond will not only be a valuable avenue for investments in Kenya but will also ensure maximum participation by the diaspora in the development of national infrastructure,” said Kenyan ambassador to Japan Solomon Maina in a statement.

The decision to form the investment firm represents a departure from the tradition where Kenyans abroad have tended to invest their money in individual ventures.

Dr Emmanuel Mutisya, the chairman of lobby group Kenyans in Japan, was elected to act as the Afro-East Investors Company’s board chairperson.

The lobby comprising mainly professionals in IT, engineering and medicine, said apart from the bond, the proceeds would also be invested in various assets back home in line with the firm’s memoranda of association.

“The members are also expected to be meeting annually to receive their dividends and to discuss the way forward for the next financial period,” reads a statement posted on Kenya’s Tokyo embassy website.

President Kenyatta had in March asked Kenyans in Japan to pool resources so as to “maximise on such an opportunity which the diaspora bond will offer.”

The lobby members, on the other hand, asked the president to press for setting up of a data bank of professionals in the diaspora “so that the government can easily tap into existing expertise and professional competence amongst Kenyans abroad for national development”.

Share thisFacebookTwitterPinterestEmailWhatsAppPresident Uhuru Kenyatta with Kenyans living in Japan during his tour of the country Kenyans in Japan Eye Diaspora Bond with Joint Investment Company  Kenyans living in Japan have set up an investment vehicle to pool together resources ahead of the government’s plan to float a diaspora bond next year. The Afro-East Investors Company