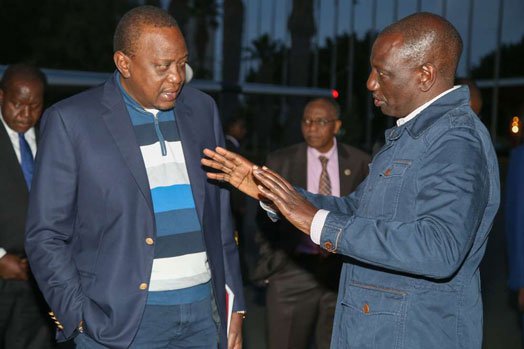 President Uhuru Kenyatta has a word with his deputy William Ruto at Jomo KIA shortly before his recent trip to Québec, Canada for the G7 Summit. PHOTO | NATION

In a statement on Friday, State House wrote that the President was engaged in urgent state matters through the weekend but steered clear of his deputy president William Ruto’s engagements.

“President @UKenyatta has been held back by urgent state matters and will not attend the African Union Summit in Nouakchott, Mauritania. The President has deployed Dr. Amb. Monica Juma, CS for @ForeignOfficeKE, to lead Kenya’s delegation to the summit this weekend,” tweeted State House.

Many Kenyans are of the impression that the President’s principal assistant – in this case DP Ruto – should be the automatic choice to represent the Head of State at such events which the latter is unable to attend.

Indeed, Mr Ruto has represented Mr Kenyatta in previous foreign engagements including, in May 2017 when he represented the President at the East African Community Head of States Summit.

Kenyans who replied to the tweet wondered why the President opted not to delegate his deputy for this foreign assignment.

James Musembi stated, “Dr. Amb Monica Juma can deliver and represent Kenya well. She is a real and great diplomat. I have total trust in her.”

Kibet Koech replied, “Hahaha which state matters. I thought Ruto is his deputy.”

Kenyans asking why Uhuru dispatched Foreign Affairs CS to AU Summit ‘instead of Ruto’ Reviewed by samrack on June 29, 2018 .