Nzambi Matee hurls a brick hard against a school footpath constructed from bricks made of recycled plastic that her factory turns out in the Kenyan capital.

It makes a loud bang, but does not crack.

“There is that waste they cannot process anymore; they cannot recycle. That is what we get,” Matee said, strolling past sacks of plastic waste.

Matee gets the waste from packaging factories for free, although she pays for the plastic she gets from other recyclers.

Her factory produces 1,500 bricks each day, made from a mix of different kinds of plastic.

But she does not work with polyethylene terephthalate or PET, commonly used for plastic bottles. 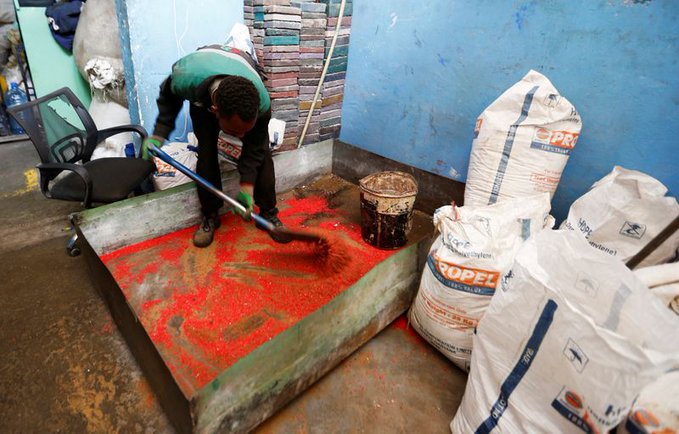 The plastic waste is mixed with sand, heated and then compressed into bricks, which are sold at varying prices, depending on thickness and colour. Their common grey bricks cost 850 Kenyan shillings ($7.70) per square metre, for example.

Matee, a materials engineer who designed her own machines, said her factory has recycled 20 tonnes of waste plastic since its founding in 2017.

She plans to add another, bigger, production line that could triple capacity, and hopes to break even by year end.

Matee set up her factory after she ran out of patience waiting for the government to solve the problem of plastic pollution.

“I was tired of being on the sidelines,” she said