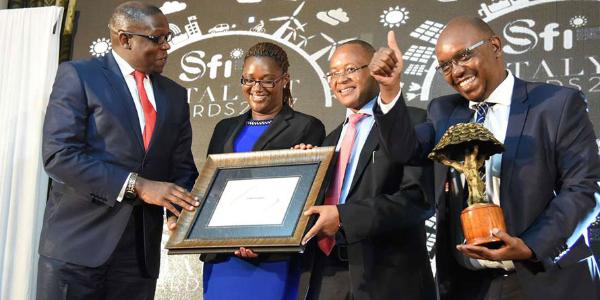 Global pre-occupation with climate change is a rather recent phenomenon especially in developing countries. Concern for the habitat, clean or green energy, sustainable development and related issues were for many decades a preserve of hard-core environmentalists and activists operating on the fringe of the economy and society that they were derisively referred to as “tree-huggers”.

Today, all that is water under the bridge, with the quest for a clean environment and sustainable, inclusive economy going mainstream as originally inspired by the Kyoto Protocol, and subsequent global arrangements such as the Paris Accord on Climate Change.

Domestication of climate change agenda is fully entrenched in law, as reflected in the Bill of Rights in the Constitution.

One segment that is likely to drive much of that migration to a clean economy is the financial services sector, especially if access to capital is made “climate-smart” that is, taking into account the sustainability impact of an activity to determine access to credit, insurance pricing and related decisions.

It is the primacy of finance in determining the character of economic development that influenced the global community through the United Nations (UN) to come up with the Sustainable Finance Initiative (SFI) intended to define and encourage adoption of standards and practices by financiers, which promote a sustainable economy.

Local lenders under the umbrella of the Kenya Bankers Association (KBA) collaborated with the SFI to come up with five sustainable finance principles that require local banks to balance their quest for returns with the economy’s future priorities and social-environmental concerns.

The guiding principles were formerly adopted on March 31, 2015 by the KBA member banks as an industry-wide policy.

“Through the integration of sustainability issues directly into our core business, we can fundamentally contribute to job creation and social inclusion, thus helping society to address challenges such as economic inequity,” said KBA chief executive Habil Olaka last Tuesday during the KBA’s Catalyst Awards in Nairobi.

To encourage industry adoption of SFI, KBA mooted the Sustainable Finance Catalyst Awards to recognise institutions that practise sustainable finance, which has a direct positive impact on the financial sector, the economy, the environment and the society at large.

“Our journey to these awards began five-years ago. KBA members confirmed that to have a long-term business success, there is need to recognise our environmental and social responsibilities while simultaneously meeting our financial objectives and economic contributions. The banks believed that such an approach can enhance innovation, competitiveness, and the quality of the credit portfolio of both individual banks and the overall industry,” said Mr Olaka.

During the Catalyst Awards event, Co-operative Bank of Kenya emerged as the overall winner for 2017 as a result of building a sustainability strategy that enables people, businesses and society to grow in a way that is sustainable in the long-term.

“As a bank that is predominantly-owned by the 15 million-member Kenyan co-operative movement, we are inclusive by design that has not only enabled us to deliver shared prosperity today, but also helped us build an awareness and prudence to avoid putting future generations in jeopardy,” said Co-operative Bank of Kenya Chief Executive Gideon Muriuki.

Co-op bank was honoured for solely financing the iconic Two Rivers Mall to a tune of about Sh8 billion ($80 million) resulting in impressive economic, social and environmental development.

Key contributions include Sh889 million taxable income, installation of a 2,000 kW grid-connected solar system, economic regeneration of the neighbourhood, and over 1,000 direct jobs created with 90 per cent of them going to women and youth.

Experts opine that it is time Kenya identified “green finance” as a niche the country could build competencies and make the proposed Nairobi International Centre of Excellence in Green Finance a reality.

The country already has an impressive track record in clean energy financing and development that it accounts for the dominant part of national power supply.

The National Treasury has already promised that the first ever green bond will be issued in the next financial year.