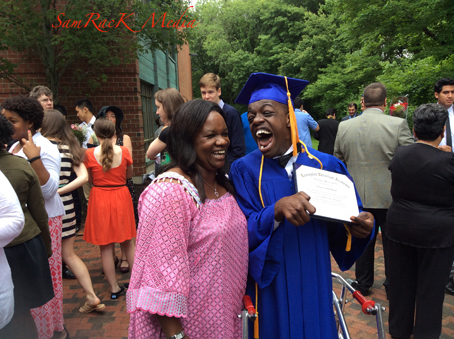 When one looks at Nicholas Karinge,they may see a young man who walks with a walker and feel sorry for him.They might look at first and see his physical hindrances and have pity on him.But if you look closer.you won’t see a boy who takes pity; he’s a joyful young man who doesn’t let his disability get in his way!And this past Saturday,this was proven as he just graduated high school at Lexington Christian Academy!

Nicholas was born in Cambridge,MA.But when he was born,disaster struck.He was born 2 months premature and weighed 2 lbs.He also did not cry!! After being resuscitated,he was rushed to the NICU,where he stayed for 33 days!!!Beyond all this,doctors diagnosed him with severe Cerebral Palsy and as completely deaf, saying he’d never walk,talk,or hear!It looked hopeless but, as Nicholas will tell you today,“The Great Physician had a different diagnosis!!!” Since then, through countless struggles,he has gone on to be an A student in a full regular class and making the honor roll with every applicable term.

Nicholas went to public school until 8th Grade,and was an excellent student.But when it came time to go to high school,he wanted to work more towards his goal of fulfilling Gods call on his life to be a Pastor.God called him to ministry when he was about to enter 7th grade on a mission trip in Maine,and he wanted to be somewhere that would shape him in such a way in these formative years.So his mom looked for schools and found Lexington Christian Academy, where he went for 4 years.

These four years were not easy for Nicholas,not only for the academic challenges of private school but,during his first year of high school, he was stricken with excruciating bodily pain.He was very sick, in and out of hospital,with the severe pain all over his body and suffering from random fainting spells.Nicholas and his mom prayed and waited for over 2 years (It had started in a minor way in 2009,but it escalated to excruciating in this freshman year!) for this condition to leave;doctors had no idea what it was or what to do,as no medication helped.But God had his way!In August of 2011,the pain went as strangely as it came,and it never came back. HalleluYah, Amen!!!
It has been Nicholas’ dream since God called him to Pastoral ministry to go to Kenya and minister to his people.This year,God fulfilled his desire and Nicholas went to Kenya for a three-week internship in pastoral ministry.He went unaccompanied for the entire trip,there and back. Surely God is faithful!

Last month, was Nick’s last day of school, and during their ceremony, he was awarded the National Honor Society’s Distinguished Character Award.But even Nick will tell you,it came as a complete surprise to him. He was not expecting anything like that!But this is a true testimony to God’s Word in 1 Peter 5:6, “Therefore humble yourselves under the mighty hand of God, that He may exalt you in due time” (NKJV).
Finally,Nicholas graduated with High Honors “to the glory of God,” as he says.He received a standing ovation walking on stage to receive his diploma. Nicholas is a true testimony to the faithfulness of God and indeed he will go far.

To those of you reading this,be encouraged in God’s love and faithfulness. When you pray, do not be afraid or doubt!God hears your cries and is just to all;He will answer you! This story is proof that God is a healer.

He still heals even today!! At the end of it all, as Jesus said, “All things are possible to him who believes” (Mark 9:23 NKJV).

By Sam Mwaura/Samrack Media From Glory to Glory,Esther Karinge (Mama Nicholas) sharing a light moment of laughter with son Nicholas Karinge shortly after recieving National Honor Society Distinguished Character Award in Boston,Massachusetts When one looks at Nicholas Karinge,they may see a young man who walks with a walker and feel sorry for him.They might look