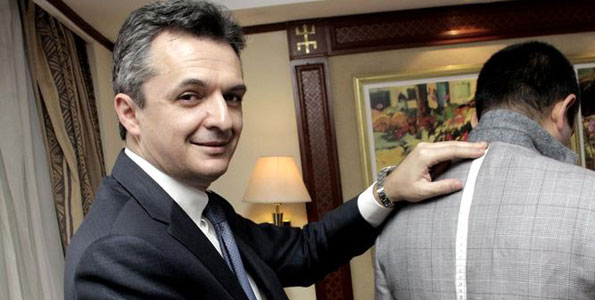 Question: Who in their right minds would buy a suit for Sh700,000? Answer: The person who wouldn’t ask that question.

At the beginning of this year, dozens of very important and accomplished men (who wouldn’t ask the above question) ducked into Nairobi Serena’s Garden Wing suites for scheduled appointments with a man who would take their measurements and make them very expensive bespoke suits.

When they strode inside the lavish room that opened into a private garden that had fresh cut flowers in vases, assorted pastries and freshly squeezed juice, they came face-to-face with Angelo Petrucci, Brioni’s chief master tailor who was just shaking off jetlag after landing in the small hours of the morning but who looked unruffled and impeccable in a fitted blue suit.

These men didn’t need an introduction into the Brioni brand. They were already dyed-in-the-wool Brioni soldiers. They knew that the brand is a high-end Italian fashion giant that has been designing hand-made suits for men since 1945.

So yes, seeing Angelo who has fitted 39 presidents (he just fitted a famous president last week but he won’t disclose who), Hollywood movies stars, Middle-East oil tycoons and singers, is the go-to master tailor for those who seek superior Italian craftsmanship and luxury when it comes to suits.

Inside the room, Angelo was being hosted by Little Red, Kenya’s premier menswear store which is ranked in the top three in Africa. Looking dapper in fitted suits were the two not-so-little Reds – Aziz Fazal and his brother Karim.

Laptops whirred silently in the deeply carpeted room, as they pored over a list of Kenya’s VVIPs scheduled for fitting that day.

“Kenya is a super metropolitan country,” offered Aziz when he finally looked up from his laptop. “And these men of taste who come here for Made-to-Measure (MM) fittings, or what Italians call the Su Misura, are extremely well-travelled and don’t want to travel over winter and step out of the airports in Europe looking like a time zone. So they dress for the seasons.”

For the past six years, master tailors from Brioni and other renowned fashion houses have been coming into Kenya for the Su Misura event in spring/summer (March to May) and autumn/winter (September to November).

Anyway, back to this room of privilege. When these VVIPs walked into the room, Angelo – who joined Brioni’s revered in-house tailoring school when he was only 12-years-old – sized them up with his professional eye before he could run a tape measure along their bodies.

From a quick glance, he immediately knew if their arms were too long, if their backs were hunched, if their shoulders were folded or if their posture needed working on and his job was to make suits that would bring out the best of a man.

“We don’t make suits,” he told me, “We make second skins.” Welcome to the Esquire’s Club.

On the massive table, taking space in most of the room, were numerous swatches that bore hundreds and hundreds of fabrics of different colours and hues and hundreds of buttons ranging from leather, pearl, horn, metallic and gold-embossed, as well as scribbling pads and pens and calculator.

After the usual niceties, the business at hand quickly commenced. The men first chose fabrics, a mind-boggling exercise that saw them leaf through all these fabrics before they eventually arrived at colours and fabrics that they desired.

Then they did the actual fitting which also involved a myriad of considerations for the sleeves which, curiously, depends on what type and size of watch one will be wearing, the type of cuffs one will have on and even the number of buttons they want.
Finally, they would have to choose from 15 different types of collars. Fifteen! The collar conversation dragged on as the sun slowly moved the shadows in the room.

They took a juice or coffee break in the courtyard afterwards as they discussed new trends before going back to choose the fabrics for the ties which would take close to half hour. A decent Su Misura tie by Brioni will take these gentlemen back by Sh30,000.

“Angelo sees about eight clients a day over the three days this exercise takes in Kenya,” Karim says. “The most unique thing about this is that each client has a very unique taste and needs. No two clients are ever the same.”

Organising the MM affair takes numerous months of planning and scheduling for these important clients with busy schedules.

There is a reservation fee of 50 per cent of the total amount that locks down your appointment (Suits go from Sh300,000 to Sh1 million depending on taste). The balance is normally paid upon delivery.

After all the measurements are taken, Angelo will fly back to Italy where he will hand sew about 7,000 stitches on one suit, spending not less than 40 hours on each suit without breaks and employing the traditional and modern Italian tailoring methods.

“Just one suit requires 220 different steps to finish,” he says. “We tailor suits that embrace the spirit of the wearer and this takes more than just stitches and fabric. It takes a deep understanding of the men and what each one wants to represent.”

Aziz adds, “The major challenge is getting new clients to understand the value they get from getting your own signature suit made for you. This exercise suits very well those people who can’t fit off the racks easily.”

Feedback is overwhelmingly positive, he says with more people requesting for this bespoke and exclusive service.

Brioni is not the only designer Little Red has brought in for the MM. There has been Hugo Boss, Armani, Corneliani, Salvatore Ferragamo, Stefano Ricci and Santoni.

“For suits, it absolutely has to be Italian because of their unparalleled craftsmanship,” said Aziz.