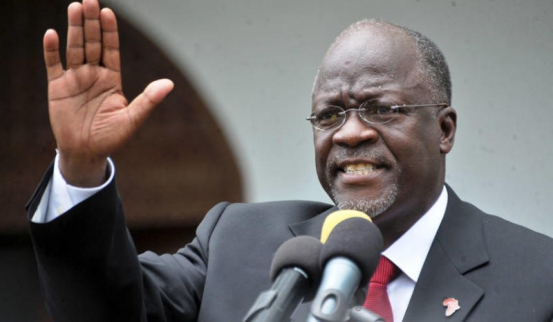 A diplomatic row is brewing between Kenya and Tanzania just days after the latter banned the exportation of unprocessed foods. President John Pombe Magufuli’s government is protesting at Kenya’s decision to ban the importation of cooking gas and wheat, saying it is a breach of the East African Community (EAC) Common Market requirements. Kenya, which has a maize shortage, cannot import the staple food from its neighbour. But EAC Cabinet Secretary Phyllis Kandie said Kenya was seeking a solution through diplomatic channels. “We are confident an amicable way forward will be agreed,” said Ms Kandie. Diplomatic channels ALSO READ: Tanzania honours Victor Wanyama by naming a street after the Kenyan skipper Energy Cabinet Secretary Charles Keter said the Government has gazetted the law that requires all LPG imports to be through Mombasa port. “We did not ban cooking gas imports from Tanzania; we only directed that such imports be through the port of Mombasa, where the quality of such products can be verified. This is while we seek a long-lasting solution,” he said. There were unsubstantiated claims that the new requirement was politically motivated, with some politicians fearing that President Magufuli could interfere with the Kenyan presidential polls in August in favour of the Opposition’s candidate, Raila Odinga, charges Mr Keter denied. Breathing fire “It is not political but we just wanted to make sure that imports are safe for use in Kenya,” he clarified. While Kenya has downplayed the row that is threatening to spill over to other sectors, Tanzania’s ministry of trade is breathing fire. In a terse statement, Tanzania’s trade permanent secretary, Adolf Mkenda, said: “It is a disappointment that in April this year we learnt through the Kenyan press that Kenya has banned the importation of cooking gas from Tanzania, and that all such imports must pass through the port of Mombasa. ALSO READ: Bett now wants Chiefs to help distribute cheap maize “Following the decision, Tanzania sought official communication from Kenya as their decision is clearly a breach of the EAC trade and customs regulations. But on May 18 the Kenyan Government effected the ban by blocking the transportation of gas to Kenya at the border.” Keter explained that the importation of LPG through Namanga was unsafe and that a gas explosion had killed one person.
Source: https://www.standardmedia.co.ke

Kenya, Tanzania embroiled in diplomatic row over exports Reviewed by samrack on June 30, 2017 .

Share thisFacebookTwitterPinterestEmailWhatsAppTanzania John Pombe Maghufuli Kenya, Tanzania embroiled in diplomatic row over exports  A diplomatic row is brewing between Kenya and Tanzania just days after the latter banned the exportation of unprocessed foods. President John Pombe Magufuli’s government is protesting at Kenya’s decision to ban the importation of cooking gas and wheat, saying it is a