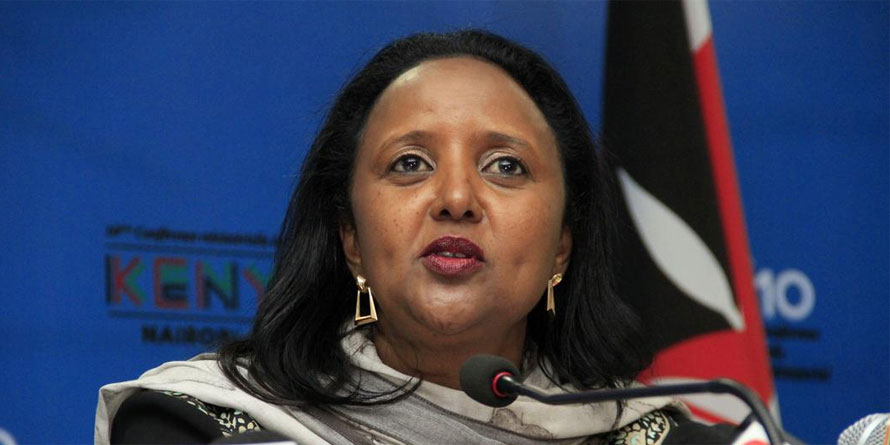 AMINA MOHAMED (PICTURED), THE FOREIGN AFFAIRS SECRETARY, DID NOT RESPOND TO QUESTIONS ON THE TRANSACTION. FILE PHOTO | NMG

Kenya has acquired a Sh2 billion office space in New York as part of a plan that will see taxpayers shoulder a Sh6.9 billion burden over the next three years to buy properties for the country’s diplomats and embassies in different world capitals.

The Foreign Affairs ministry made the purchase public through documents tabled in Parliament last week.
Kenya’s Permanent Mission to the United Nations has assumed ownership of the property it had leased for many years.

The ministry said “the purchase of office space in New York has been concluded at a cost of Sh2 billion,” and that the building is now housing both the UN mission and the consulate.

A New York real estate magazine, The Real Deal, says the property acquisition was made in January at a cost of $18.3 million (Sh1.866 billion).
This is at least Sh100 million lower than the Sh2 billion quoted by the ministry based on the prevailing exchange rates at the time.

The Kenyan shilling opened the year at Sh102.50 against the US dollar and traded at a low of Sh104 end of January, but has now bounced back to where it was at the beginning of the year.

“In the world of mid-market New York City investment sales last week (January), Kenya’s Permanent Mission to the United Nations paid $18.3 million for a commercial condominium unit at 866 United Nations Plaza,” the magazine says, adding that the “mission currently leases their offices in the same building, and this is their first real estate acquisition.”

Amina Mohamed, the Foreign Affairs secretary, did not respond to questions on the transaction.

Rent expenses by Kenyan foreign missions now account for a fifth of the ministry’s recurrent budget of Sh17.9 billion or Sh3.58 billion.

Kenya has 49 embassies and high commissions abroad alongside 27 consulates – a subdivision of the embassy that protects interests of Kenyans in foreign lands.

Besides Kenya’s consulate in New York, Nairobi has two other representations in the US.

They include an embassy in the capital, Washington, D.C, and a consulate-general in Los Angeles.

International relations experts said the permanent address for the Kenyan mission sends a powerful signal that Nairobi is keen to deepen relations with the UN and the US.

The ministry said it would be active in the property market abroad through purchase of chanceries, ambassadors’ residences and staff houses to cut down on rent costs.

The recurrent budget has been rising over the past four years, leaving little cash for development projects such as opening new missions that are crucial for expanding Kenya’s diplomatic presence.

The developers of the 866 United Nations Plaza say on their website that space purchase is cost-effective compared to leasing.

“The annual cost of office condominium ownership is historically less than the cost of leasing. Current market lease rates far exceed the annual office condominium carrying costs, which include common charges, utilities and, if applicable, real estate taxes and mortgage payments,” the website says, adding that the complex proximity to UN offices is a plus.

The Foreign Affairs ministry has recently been hit by financial shortfalls, hampering efforts to open new missions and trade commission offices to shore up Kenya’s international relations and economic diplomacy.

It was expected to open trade commission offices in key commercial capitals such as New York, Shanghai, Frankfurt, Johannesburg and Brussels, but this has not been achieved.

The ministry bought an ambassadors’ residence in Geneva (Switzerland) and paid 40 per cent of the contract price, leaving the balance to be cleared in the next financial year.

The purchase price has not been disclosed in the budget figures.

The renewed purchase and expansion of properties in Kenya’s mission abroad is likely to ignite memories of the Tokyo embassy purchase scandal in which taxpayers are alleged to have lost Sh1.1 billion.

Share thisFacebookTwitterPinterestEmailWhatsAppAMINA MOHAMED (PICTURED), THE FOREIGN AFFAIRS SECRETARY, DID NOT RESPOND TO QUESTIONS ON THE TRANSACTION. FILE PHOTO | NMG Kenya sinks Sh2 billion into New York consulate Kenya has acquired a Sh2 billion office space in New York as part of a plan that will see taxpayers shoulder a Sh6.9 billion burden over the