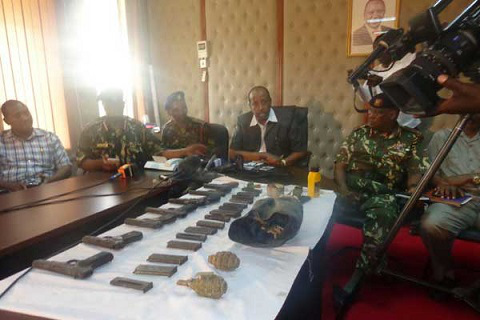 Some of the weapons recovered from six Tanzanians who were arrested in Garissa Town on August 23, 2015. They are suspected to have been on their way to Somalia to join Al-Shabaab militants.

Six Tanzanian nationals were arrested on Sunday and a cache of weapons seized from them by police in Garissa.

Seven pistols and seven grenades were recovered during the arrest.

It is suspected that the men were heading to Somalia to join the terrorist group Al-Shabaab.

Addressing journalists in his office in Garissa Town, northeastern Regional Coordinator Mohamud Saleh said the men, aged between 20 and 40, were intercepted in Dadaab Town as they were planning to cross into Somalia.

Mr Saleh said the men were being held in Garissa, where they will be interrogated for more information.

He added that two women, a Kenyan and a Tanzanian, were also arrested earlier this week as they were heading to Somalia to become Al-Shabaab brides.

“We arrested six Al-Shabaab militiamen with two pistols, seven grenades, 20 rounds of ammunition and 15 magazines in Garissa Ndogo trading centre in Garissa Town on Sunday and we are looking for more accomplices who are on the run,” he said.

He said the suspects were being held at Garissa Police Station for more interrogation by officers from the anti-terror police unit.

He added that police were still following crucial leads that would help them apprehend more suspected Al-Shabaab militants hiding in the town.

The regional coordinator said the security officers got a tip-off from the public about the presence of the men.

“We are happy that the locals are cooperating very well with the security agencies in providing intelligence. We are now receiving intelligences even from herders in remote areas,” he told reporters.

He further said a security operation to flush out suspected members of Al-Shabaab believed to be hiding in the dense Boni Forest that extends from the coastal strip to Ijara in Garissa County would begin soon.

He added that security officers had also recovered three automatic assault rifles and eight rounds of ammunition from notorious bandits responsible for highway robberies along the Mandera-Arabia road.

Share thisFacebookTwitterPinterestEmailWhatsAppSome of the weapons recovered from six Tanzanians who were arrested in Garissa Town on August 23, 2015. They are suspected to have been on their way to Somalia to join Al-Shabaab militants. Kenya Police in Garissa arrest 6 Tanzanians heading to Somalia, recover weapons Six Tanzanian nationals were arrested on Sunday and a