Kenya now in dilemma over blowing up ship with drugs 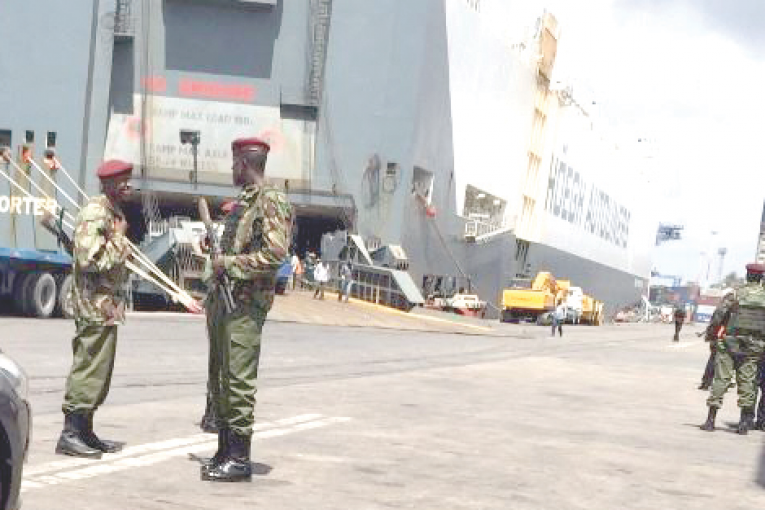 Kenya now in dilemma over blowing up ship with drugs

Kenya is facing another dilemma on whether to blow up one of the biggest vessels ferrying United Nations (UN) peace-keeping mission trucks, after suspected heroin of unknown value was allegedly found staffed in some of the trucks’ tyres.

Automatic machine guns believed to be part of the UN cargo have also been recovered from the vessel. However, it is not clear whether the weapons had been declared as part of the cargo or whether the vessel had notified Kenya Ports Authority (KPA) that it was ferrying firearms.

This came even as police said the verification exercise could end by today. Already, a sample of the suspected drug recovered from the vessel have been taken for sampling by officials from the government chemists who arrived in Mombasa on Monday.

This came even as the verification exercise was temporarily halted yesterday, to allow a team of officers from the special elite squad “Recce” rest after a four-day operation at the port of Mombasa. The officers have been guarding and searching the ship since Thursday night when they stormed the vessel and have been working since.

The officers went to the General Service Unit headquarters near State House Mombasa. Mv Hoegh Transporter, is one of the biggest vehicles carrier with a gross tonnage of 57,757 and a dead weight of 21,400 tonnes. Coast regional Police Commander Julius Wanjohi said the ship could be blown up in accordance to an executive order issued by the President on ships caught ferrying drugs in Kenyan waters.Ferrying drugs “If it is confirmed that the vessel was ferrying drugs then a directive on the same will be issued,” he said. Wanjohi said the operation was a closely guarded and intelligence led exercise, adding that some 257 Tata made UN trucks and 350 cars had been verified by Sunday night.

“They have finished verifying the upper deck and are now in the lower deck which has few cars and other luggage,” said Wanjohi. He said crew of the ship which includes Filipinos and a Norwegian captain had been detained inside the vessel and were helping detectives in search of the drugs.

Already Kenya has destroyed two small vessels which were seized by the Kenya security agencies while ferrying heroin. The vessel remains cordoned off at berth number 13 where detectives from the Anti-Narcotic and Anti-terror police unit have been verifying  cargo.

The UN vehicles which were loaded in Mumbai, India  were destined to the Democratic Republic of Congo.  The vessel began it voyage on July 22 at the Port of Hitachi in Japan, where it ferried personal vehicles destined to Kenya before it could sail to Korea on August 1.

Wanjohi said yesterday that the vessel has been on international security ladder since after it left Mumbai.

Post source : Murimi Mutiga @PeopleDailyKe
Kenya now in dilemma over blowing up ship with drugs Reviewed by samrack on September 22, 2015 .

Kenya now in dilemma over blowing up ship with drugs Kenya is facing another dilemma on whether to blow up one of the biggest vessels ferrying United Nations (UN) peace-keeping mission trucks, after suspected heroin of unknown value was allegedly found staffed in some of the trucks’ tyres. Automatic machine guns believed to be part