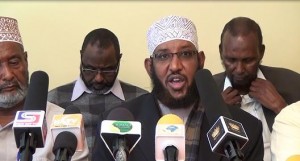 Kenya Muslim Clerics have resolved to work hand in hand with the Government of the day to intensify and resolving of Al Shabaab propaganda which continues to lure many youths into joining the terror militant insurgent group.

The Muslim religious leaders comprising of the Somali community, launched a campaign to caution the youths against radicalization by Al Shabaab.

The religious Muslim Clerics were speaking Sunday in Nairobi promised to work with the government to intensify their campaigns to their local communities with the main agenda of neutralizing the misleading narratives from the militant group.

The clerics cited out that to minimize radicalization and extremism amongst our youths will require a joint effort of all stakeholders; political class, religious leaders and the government. According to Sheikh Mohammed Shakuul, who is a religious leader and hold businesses in Nairobi Eastleigh assured the government that the Muslim Clerics will do all they can to ensure success of this endeavour.

“We must not let the Al Shabaab win this battle; the real aim of this terror group is to spark a major religious conflict between Muslims and our fellow Christians who we have coexisted for many years in peace and harmony. Let’s not fall into their trap Mr. Sheikh Mohammed Shakuul said during the address.”

This meeting brought together various religious clerics from many parts of the country with notable coming from the affected hotspots like Wajir, Mombasa, Isiolo, Garissa and Mandera all vowing to come together with aim of fighting and countering radicalization of the Kenyan youths into the Al Shabaab militant group.

The Muslim Cleric leaders however cautioned and termed as unfair those leaders accusing that radicalization is only taking place in Mosques saying this is not totally true and thus calling onto the joint effort of every Kenyan in whatever capacity to join hands and fight this menace that is about to tear our peace.