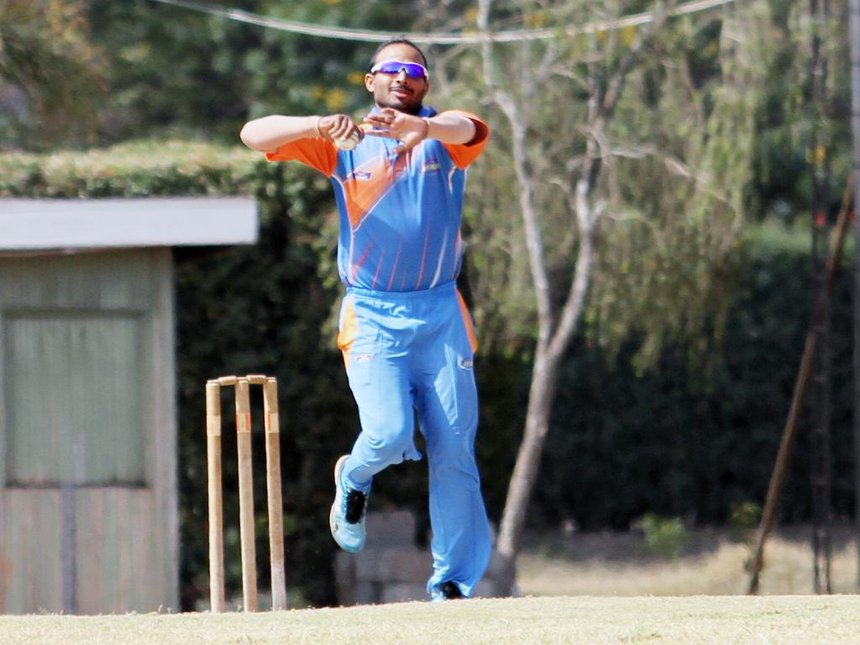 Kenya recorded a sensational one-run victory against hosts Baroda Cricket Association Senior team in a nail-biting finish at Reliance Cricket Stadium in Baroda, India.
Young Dhiren Gondaria struck a fine century to help Kenya to a total of 250 all out in 49 overs before Kenya bowlers put on a good show in the closing stage of the chase to bowl out the hosts for 249 with a ball to play.
Gondaria blasted 118 off 39 balls with seven towering sixes and eight boundaries as Kenya put on a good batting show against the hosts.
Sent into bat, Kenya lost Alex Obanda for five after an opening stand of 23 with Irfan Karim but then came Gondaria, who ended up being the rescuer for Kenya.
He added a third wicket stand of 121 with Collins Obuya after he had lost Karim for 20 runs in the 15th over.
Gondaria reached his half century from 46 balls that had two sixes and five boundaries in the 21st over. He completed his century in the 32nd over after adding five more sixes and a four from 45 balls. He lost Obuya in the 33rd over after the two had shared the crease for 112 balls.
Obuya was caught after hitting a 42 ball 40 which included three fours and a six. Gondaria fell four overs later to Gurjit Saini with the board on 195.
Saini got his third of the day on the very next ball when he had the skipper Rakep Patel caught on four from 11 balls.
From 177 for 2 in 33 overs, Kenya were on 206 for 7 after 41 overs when Karan Kaul (4) and Rushab Patel (5) were only allowed brief stay on the crease.
Nehemiah Odhiambo (22 not out) and James Ngoche (11) added 28 for the eighth wicket to get Kenya to 234 before the tail off Lucas Oluoch and Elijah Otieno got the scores to 250.
Later, Dhiren Mistry (93) made valuable contributions to take the total to some respectability before the Kenyan bowlers put breaks on their surge with regular wickets towards the end of the match. After posting 57 for 2 in 15.5 overs, Baroda rode on Mistry’s half century to get to 117 for 4 after 28.4 overs.
Baroda were on course for a win until Mistry was bowled in the 42nd over by Odhiambo with the board on 169.
Arpit Bhalware (49) tried to salvage something but tumbled with the board on 217. Godadra also put on a brave fight adding 21 but was short of support as Jaydev Patel was run out on the second last ball of the inning. Odhiambo finished with 3 for 58 with his brother bagging 2 for 41.
Kenya hit Baroda Reviewed by samrack on March 8, 2017 .