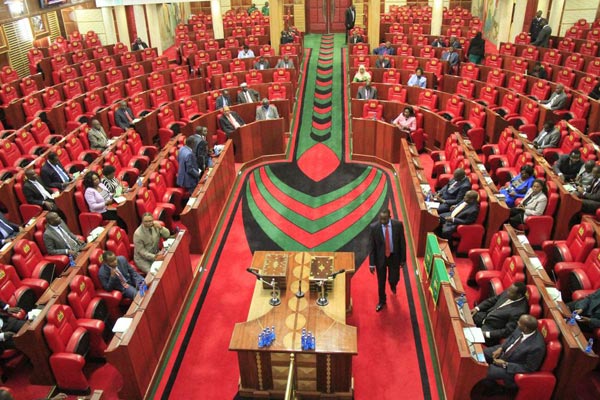 The Jubilee Party is on course to change election laws before repeat presidential election is held on October 26 amid protests and boycott by opposition.

The National Assembly, controlled by the ruling party, has formed a special committee to scrutinse the proposed changes.

Here are some of the amendments President Kenyatta’s party is pushing for:

— It provides for the vice-chairman to automatically become the head of the commission in the absence of the chairman.

— If both the chairman and the vice-chairman are absent, the commissioners present can elect one of themselves to act as chairman.

On the commission: The Bill reduces the quorum of the commission from five to half of the existing members but not less than three.

— If there is no unanimity on a decision, matters would be decided by a majority of the commissioners present and voting.

On the management of a presidential election: The bill provides for concurrent electronic and manual transmission of tabulated results from polling stations to the constituency and national tallying centre, publish the result forms in a public portal.

— If there is a discrepancy between the manual and electronically transmitted results, the manual shall prevail.

— A failure to transmit the results electronically shall not be used to invalidate the result.

— It requires the commission to announce the result only when it has all the forms.

— It also requires the commission to develop a complementary system.

— Result forms cannot be declared void if they are not in line with the prescribed format as long as the deviation is not designed to mislead.

If a presidential election is annulled: The IEBC will be required to publish a notice indicating that no candidate was elected, announce a date for the fresh election and publish the names of those to participate within seven days.

— If there are only two candidates and one withdraws, then the one remaining will be declared to have been elected unopposed.

On offences: Election Offences (Amendment) Bill 207 says any presiding officer and returning officer who knowingly fails to sign or fill completely result forms, submit incomplete forms or change or falsify them will serve five years in jail without the option of a fine.

The National Assembly. Nasa MPs stormed out of the chamber to protest changes to poll laws. FILE PHOTO | JEFF ANGOTE | NATION MEDIA GROUP Kenya Election law changes: The summary The Jubilee Party is on course to change election laws before repeat presidential election is held on October 26 amid protests and boycott by opposition.