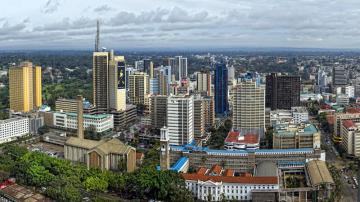 [Modern Nairobi Skyline] Kenya really is at the cutting edge for African listed property markets. And more REITs are expected to list on the Nairobi Stock Exchange going forward.

Kenya is dominating East African property developments because of its stability and investment opportunities, Africa Property News.com has learned.

The country’s infrastructure is improving steadily.

Last year the country witnessed the inauguration of a $540m mixed-use development, the Garden City developed by Actis.

Old Mutual Property last month invested $6.3m in the Two Rivers Lifestyle Centre (TRLC), the holding company for the Two Rivers Mall. The mall is being built on 10.2 acres of land, which is part of the expansive mixed-use project in the diplomatic blue zone neighbourhood of the upmarket Runda and Gigiri.

A vote of confidence for Kenya, is that the Real Estate Investment Trust (REITs) structure and tax dispensation for companies have been implemented, indicating that the listed property market in the country has developed markedly over the past few years.

Kenya really is at the cutting edge for African listed property markets. And more REITs are expected to list on the Nairobi Stock Exchange going forward.

The Reit structure was launched in SA in 2013 and has helped to make SA’s property sector the envy of other countries’ sectors. More institutional investors from SA and abroad have bought into Reits. South African Reits have also joined indices and then index trackers have bought into them which has also raised their profile. Last year, eight property companies listed on SA’s JSE.

Kenyan Reits are likely to enjoy similar success. If they do well, the Reit system could be rolled out to other East African countries.

East African countries appreciate that Reits are in line with worldwide best practice. Reits have various tax benefits and investors have been attracted to how much easier to understand the Reit capital structure is. One tax benefit which is enjoyed by Reits is that there is no capital gains tax on acquisitions and on mergers and distributions on shares, and debentures are also tax deductible expenses. New property companies do not pay tax when they list.

“The objective of creating a Reit is to create a commercially viable product that makes investment in large- scale, income-producing immovable property accessible to a broad range of investors through the purchase and sale of liquid securities,” head of cash markets at the Nairobi Securities Exchange (NSE), Lina Ng’inja said when the Reit system was announced in Kenya.

The first Kenyan Reit listed in Nairobi last year. This was the Fahari I-Reit which was brought to market Stanlib Kenya. The I-Reit was listed in the unrestricted Main Investment Market Segment (Mims).

Stanlib’s head of listed property funds, Keillen Ndlovu said that the I-Reit was listed, because the real estate market there is heading for a boom as an asset class in Kenya.  Various companies would want to become Reits in Kenya due to the significant opportunity for property growth in the country and also for the benefits attached to the investment vehicle. The telecommunications industry was attractive and various companies were like for office space in Kenya.

Analysts feel that Africa is a long term but exciting prospect for investors and that Kenya is a key market within the developing world.

Nairobi stands out in East Africa as a growing city which offers a lot to investors. Kenya is the economic and transport hub of East Africa and has a population of about 45 million people which is close to SA’s 50 million population.

The country’s real gross domestic product growth has averaged around 5% for the past several years. Kenya is ranked among low middle income countries with per capita income of over $1,300. Agriculture is the main driver of the Kenyan economy but transport infrastructure and communications businesses are growing. About 80% of Kenya’s population work at least part-time in the agricultural sector, including livestock and pastoral activities.

More JSE-listed property companies are considering investing in Kenya, if they have not already.

A challenge to Kenya or at least the next East African country to excel after Kenya, could be Tanzania. This country’s gross domestic product rose on average at 7 percent each year for the last decade.

There is demand for apartments, villas, hotels, malls and offices. The problem is that many Tanzanians are very poor overall with the GDP per capita being about 720 us dollars according to the IMF. Much of the property demand is coming from the rich elite and the government officials of the country.