Kenya and Uganda to collaborate on SGR 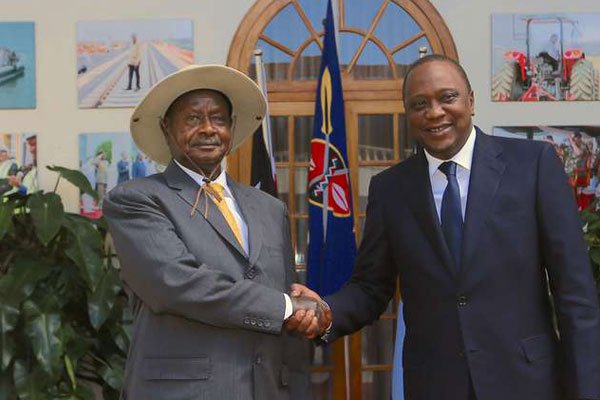 Kenya and Uganda to collaborate on SGR

Kenya is banking on the reduced cost of clearing and moving goods from the Mombasa Port to Uganda and the progress of the standard gauge railway project to revive its bid to extend the line to its neighbour.

During a bilateral meeting between President Uhuru Kenyatta and his Ugandan counterpart Yoweri Museveni at State House, Nairobi, on Tuesday, Kenya said the speed of clearing goods and the upcoming cargo trains are the answer to Uganda’s transport needs.

“The modernisation programme has resulted in reduced average time to import and export goods through the port of Mombasa – from 11 days to under 3.5 days – and work for even greater efficiency continues,” State House said in a statement.

CARGO
And with the commissioning of the Inland Container Depot at Embakasi, President Kenyatta told his counterpart that more goods would be transported by train.

“This will further shorten the time of moving goods from Mombasa to Kenya’s hinterland and neighbouring countries as well as the cost for doing so by a further 30 per cent,” the statement added.

Uncertainty hit the joint Kenya-Uganda SGR project after Uganda said it was considering building a railway through Tanzania instead.

It is estimated that more than 50 per cent of the cargo handled at the Port of Mombasa is destined for markets like Uganda, with 11.2 million tonnes of cargo moved between the two nations annually.

TRADE
On his part, President Museveni told President Kenyatta that “Uganda was ready and committed to the SGR project, and would work with Kenya to achieve its commitment”.

Mr Museveni had in July approved the borrowing of $2.9 billion for the construction of the railway from the Malaba border to its capital Kampala, giving the clearest signal yet that the regional infrastructure project was back on track.

“Both Presidents agreed on working jointly on taking the SGR line from Naivasha to Kisumu and onwards to Malaba on the border with Uganda,” a statement from State House said after the joint meeting.

TRANSPORT
The line to Kisumu, the statement added, will also serve Uganda through the Lake Victoria ports of Jinja, Masaka and Entebbe.

Tuesday talks largely focused on the SGR and the East African Community.

Phase Two of the SGR – Nairobi to Naivasha – is on course, and is expected to be completed in 2019.

From Naivasha, the Heads of State agreed that the line would be done jointly towards the border in Malaba, Busia County onwards.

Uganda had already earlier committed to ensure that at least 80 per cent of all cargo its cargo would be transported through SGR.

AMISOM
On Somalia, where Kenyan and Ugandan soldiers have joined the African Union Mission, President Museveni agreed to convene a meeting of Chiefs of Defence Forces from Troop Contributing Countries to discuss progress in the mission.

Thereafter, State House said President Museveni would consider convening a summit of the countries with troops in Somalia.

“On the continued deployment of troops in Somalia, the leaders emphasised that it was necessary for the Somali government to continue building and strengthening its national army,” the statement said.

Further, President Museveni will convene a meeting of EAC Trade Ministers in Kampala in January to chart the way forward on the European Union aid as a follow-up to discussions held in Brussels earlier in the year.

Kenya and Uganda to collaborate on SGR Reviewed by samrack on December 19, 2017 .

President Uhuru Kenyatta (right) welcomes his Ugandan counterpart Yoweri Museveni at State House on December 19, 2017. The two heads of state discussed about bilateral and regional issues. PHOTO | SAMUEL MIRING’U | PSCU Kenya and Uganda to collaborate on SGR Kenya is banking on the reduced cost of clearing and moving goods from the