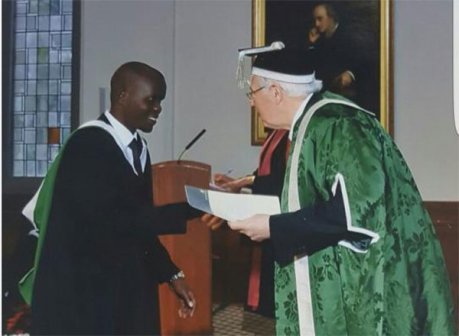 A Kenyan student was on Monday feted for being the best energy engineering student at the prestigious Leeds University in London United Kingdom. Anthony Chesang an employee of Kengen topped his class with a rare first-class prized degree at Leeds University and the Tullow Oil Company. In the last two years, Chesang and 12 others pursued Master’s degree in Energy and Environment Engineering. Lord Chidgey who doubles as co-chair African all party parliamentary group and Liberal Democrats’ party shadow minister for Africa congratulated Chesang for his stalling performance and also thanked Tullow Oil Kenya for their programme of providing scholarships to talented and promising young student. READ: KenGen reveals plan to upgrade Eburru plant capacity tenfold “Chesang’s success underlines their importance, as valuable investment in Kenyan talent for the future, and hopefully will spur the company on to continue and hopefully expand their programme,” said Lord Chidgey. Lord Chidgey who was the guest of honour on the fete at International Maritime organization at the Westminster Bridge said the Kenyan student’s achievement was a rare first-class prized degree at Leeds University and the Tullow Oil company. ‘It must be wonderful for young Chesang to know that he topped his class at Leeds University with a First in Energy and Environment Engineering. It is a tremendous reward for what must have been a dedicated and sustained effort, from which I am sure he will benefit as his career develops over the years ahead” said Lord Chidgey who gave Chesang a £100 money prize money. Chesang 26, said he was excited and thrilled. “I am humbled as I really did not expect to top the class, I thank God, Tullow Oil and Kenya generating Electricity for the study leave they willingly granted me’. Chesang said. Mrs Gladys Seroney, Chesang’s aunt said, “His outstanding performance is my greatest news for the year.” Chesang said he wanted to register as an energy manager. “I really want to pursue a doctorate degree by researching on solar grid and system integration. I want to find out how to make large scale solar power systems more attractive, cost-effective and expand its penetration,” said he said. READ: KenGen to receive funding from Belgium for Ngong Wind Power Project expansion Chesang explained that he thinks that solar energy is the future of Sub-Saharan Africa power needs. “It is clean, renewable, sustainable and climate friendly as well as powering the economy. Look at the UK, by 2014 it had installed huge solar capacity yet the sun is never overhead as it is far north and experiences winter. Kenya should by far surpass this.” said Chesang.
Read more at: https://www.standardmedia.co.ke/