Kalonzo: I am not your traitor 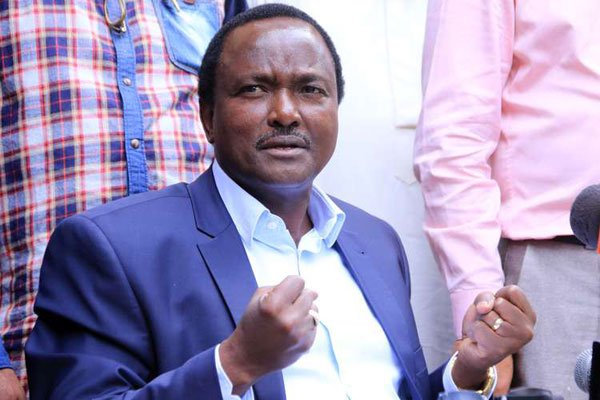 Kalonzo: I am not your traitor

As the clocks ticks towards the deadline on the choice of the Opposition’s presidential flagbearer, Stephen Kalonzo Musyoka’s public demeanor has changed.

The smooth, diplomatic posture has been replaced by a rough, populist stance as the jockeying on who will take on President Uhuru Kenyatta in the coming elections hits the home stretch.

The Wiper Democratic Movement party leader has admitted as much but he is still unhappy. His body language when among his National Super Alliance (Nasa) co-principals betrays him — a little withdrawn and uncharacteristically quiet.

He is no longer the cheerful, boisterous soul of the Narc days — when he bolted out of then ruling party Kanu to help wrest power from the Nyayo regime.

Speaking candidly, Mr Musyoka recently expressed his disgust at the talk that he will quit Nasa should he fail to be picked as the Opposition’s candidate in the August 8 General Election.

It all boils down to trust and Mr Musyoka feels he is a victim of spurious half-truths as he battles growing chatter that he will leave Nasa.

History is not on his side, however.

In August 2007, Mr Musyoka bolted out with the Orange Democratic Movement of Kenya (ODM-Kenya) certificate and abandoned Mr Raila Odinga, who found solace in lawyer Mugambi Imanyara’s Orange Democratic Movement (ODM). His relationship with Mr Odinga and other stalwarts hit a sour note during the infamous rally at Hadija Primary Shool, Mombasa, when he was jeered by Mr Odinga’s supporters, who told him to step down from the presidential race.

They both lost to former President Mwai Kibaki but Mr Musyoka was appointed Vice-President as the country plunged into chaos. Mr Odinga would become Prime Minister in a deal to end the infamous 2007/2008 post-election violence, the country’s worst ever.

The former long-serving Mwingi North Member of Parliament is usually blamed for that split.

“I was made to look like I am the one who left, yet I stuck in the party and Raila left” said Mr Musyoka. “I am not good at propaganda; I guess that is why.”
One of the people he remembers on that day carrying the “nyundo” (hammer) is the then-Kisauni MP Hassan Joho, now the Governor of Mombasa and Deputy Party Leader of ODM.

Mr Musyoka told the Nation that his critics, especially in Nasa, want to force him out of the nascent coalition.

“They are in for a surprise,” said Mr Musyoka, “because I am in Nasa to stay.”

He added: “I have heard claims that I have been paid millions by Jubilee to quit Nasa. These are people who do not know me. Why is it that I attract such suspicions? I respect myself.”

Mr Musyoka is unhappy that, despite his public assurances and insistence that he will remain in Nasa, his critics continue to push the defection line. Last week, Mr Musyoka defended Minority Leader Francis Nyenze, who had provoked outrage for saying that Wiper would leave Nasa if Mr Musyoka was not given the presidential ticket.

While other politicians within Nasa have openly campaigned for their own candidates, Mr Musyoka asked, why was Mr Nyenze being vilified?

Mr Musyoka’s supporters know that his support base of over a million voters is crucial to Nasa’s victory. Also, at 63, age is catching up with him.

“I want the country to know that I am determined to run for the Presidency of the Republic of Kenya on a Nasa ticket,” said Mr Musyoka said.

He added with some finality: “No amount of bad-mouthing or negative propaganda will deter me from pursuing that legitimate political aspiration because I believe that the time to move has come.

“I was ready for it in 2002, when I stood firm with the ‘Kibaki Tosha’ declaration. The people remember I said I was ready to bite the bullet.”

Mr Musyoka feels that he has been misunderstood or misrepresented by what he calls “malicious” people.

On the Nasa ticket, he argues that his colleagues and even critics “know” that his candidature is more stabilising and undivisive and that is why some reportedly want him out of the alliance.

“My candidature inspires hope in the Rift Valley and also in central Kenya,” said Mr Musyoka. “That is what I mean when I say I will provide a leadership that will unify the country.”

He asked his critics not to “demean” the “principal of servant leadership” that he stands for.

Mr Musyoka dismissed as “weak minded” and wishful thinkers those who want to “push” him out. He said: “I am aware of that trap and will not fall into it.

“If Nasa nominations are done fairly and with the objective of wanting to beat Jubilee, ask the man in the streets who among us is able to beat Jubilee and raid its strongholds.”

Mr Musyoka is firm that his time to run as the Opposition’s presidential candidate is now. He is reluctant to discuss a future stab at the Presidency but says he would not want to emulate President Robert Mugabe, who, at 92, is seeking re-election in Zimbabwe.

“My plan is not to be in leadership in my 80s” said Mr Musyoka.

He has also vowed not to raise the issue of his 2013 Memorandum of Understanding with Mr Odinga and Ford-Kenya’s Moses Wetang’ula again. One of the reasons is that there is a new entrant, Amani National Congress (ANC) leader Musalia Mudavadi, and also because the deal was not declared publicly because of it’s “sensitivity”.

For now, Mr Musyoka says: “As a party leader, I am carrying the aspirations of many people and these are important things to me.”

He cited a recent appeal by Ukambani leaders — among them Wiper chairman David Musila, former Cabinet minister Charity Ngilu and Governors Kivutha Kibwana and Peter Malombe — for an end to the defection talk at a rally at Emali. Senator Musila and Mrs Ngilu are seeking to unseat Governor Malombe in Kitui, Mr Musyoka’s home county.

This year’s election will be historic because it will be the “third and final liberation of this country,” said Mr Musyoka. “We need a leader who will unify the country and one who will bring down, in a very significant way, negative ethnicity.”

But he first has to shake off the “water melon” tag and beat President Kenyatta, probably on a Nasa ticket.

Share thisFacebookTwitterPinterestEmailWhatsApp Mr Kalonzo Musyoka in Nairobi on January 20, 2017. PHOTO | JEFF ANGOTE | NATION MEDIA GROUP  Kalonzo: I am not your traitor As the clocks ticks towards the deadline on the choice of the Opposition’s presidential flagbearer, Stephen Kalonzo Musyoka’s public demeanor has changed. The smooth, diplomatic posture has been replaced by