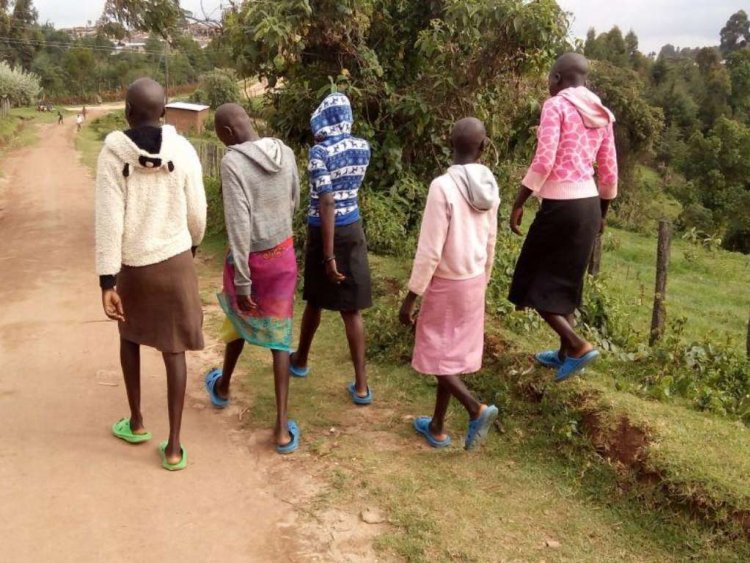 THE GREAT TREK: The girls rescued in Pokot South subcounty after they escaped forced marriage in Kacheliba.

Five girls aged between 10 and 14 have been rescued by Kapyogen chief.

They escaped from forced marriage at Kaitokom village in Kacheliba constituency.

The girls walked from Sunday to Tuesday from their village to Pokot South subcounty before they were rescued late in the evening.

Lomuton said when the woman interrogated the girls they said they had run away from their homes since their parents wanted to marry them off.

“This is violation of children’s rights. They are too young to be married off,” he said.

The chief said he will work with his Pokot North subcounty counterpart to trace the children’s parents.

“The parents must be arrested and prosecuted since the law does not allow early forced marriage,” he said.

Monicah Katatwa, who rescued the girls, said they walked more than 150km before finding help.

“I decided to host the girls for the night since they looked tired, hungry and helpless after walking for many days,” she said.

Katatwa asked parents to value girls’ education and allow them further it.

“These girls have never gone to school. This shows their parents were busy preparing them for marriage,” she said.

Last week, 50 girls who had undergone FGM and ready to be married off were rescued and enrolled in school.

Teresa Lokichu, an anti-FGM ambassador in the county, asked parents to value education and abandon the outdated practice.