Jubilee to get lion’s share of nominees in both Houses 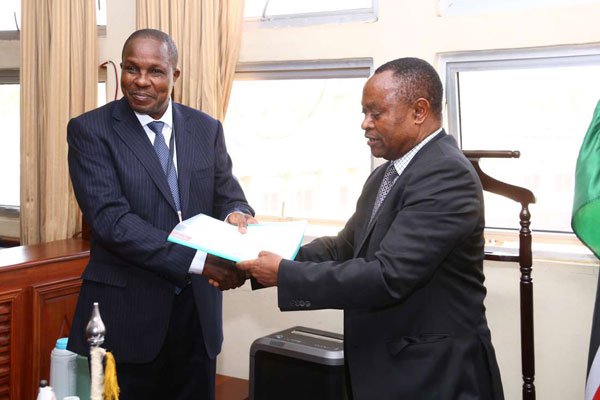 Jubilee to get lion’s share of nominees in both Houses

The Jubilee Party will have the most nominated Members of Parliament, 16, after it attained the majority in both the National Assembly and the Senate in the General Election.

Parliament has to convene within 30 days of the elections, as per the Constitution.

Mr Michael Sialai, Clerk of the National Assembly, said Parliament’s full membership can only be established after the Independent Electoral and Boundaries Commission publishes in the Kenya Gazette the list of both elected and nominated lawmakers.

The commission said on Wednesday it was working on the list and was non-committal on when it can be published.

There are already indications that the first sitting will be on Tuesday, next week, meaning that the publication could be done by the end of this week.

Going by the numbers in both the Senate and the National Assembly, the party on whose ticket the President was elected will have the opportunity to further increase its dominance in the Legislature.

The picture is much clearer in the Senate, which has less members, and where the Jubilee Party’s dominance is greater than the rest of the parties and independents.

The parties are ranked in similar manner to the National Assembly’s order, as per their strengths.

This means that Jubilee qualifies to fill at least half of the 20 positions available for nominated senators.

The Senate has 16 nominated women and four slots for the youth and the disabled.

With Jubilee’s numbers, it would be entitled to at least eight women nominees and two slots for a representative of the youth and of the disabled.

This means that the first eight women nominees in the list submitted to the IEBC are guaranteed to become senators.

Ms Mugo was a nominated senator and vice chairman of the Parliamentary Service Commission in the Eleventh Parliament. Ms Milgo contested in the Jubilee Party’s nominations for Bomet Woman Rep while Ms Omanga lost to Ms Rachel Shebesh in the Nairobi race.

Ms Seneta was the Kajiado Woman Rep. She lost to Peris Tobiko in the race for the Jubilee ticket for Kajiado East.

Ms Waqo was on the list of Jubilee candidates for election to the East African Legislative Assembly before the election was scuttled by the last Parliament.

Jubilee also has a chance to nominate two other people, Mr Isaack Mwaura and Ms Joyce Amasong (representative of the disabled), and Prengei Victor and Wambui Nyutu (youth representative).

Other calculations from within Parliament have ODM  getting seven slots for the Senate, as it has 13 senators, meaning ODM secretary general Agnes Zani, National Elections Board chairman Judith Pareno, Beatrice Makori, Naomi Shiyonga, Rose Nyamunga and Beth Syengo could be nominated. Sylvia Mueni Kasanga of Wiper could also be in.

ODM could have Jacqueline Adhiambo Oduol and Wilson Sossion in the National Assembly  while Wiper could have Sammy Kipkorir Seroney and Grace Mutua.

Jubilee to get lion’s share of nominees in both Houses Reviewed by samrack on August 17, 2017 .

Share thisFacebookTwitterPinterestEmailWhatsAppJubilee to get lion’s share of nominees in both Houses The Jubilee Party will have the most nominated Members of Parliament, 16, after it attained the majority in both the National Assembly and the Senate in the General Election. Parliament has to convene within 30 days of the elections, as per the Constitution. Mr