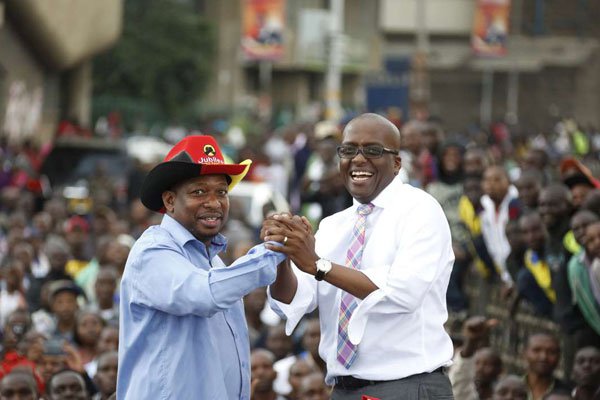 The Jubilee Party on Wednesday exuded confidence of winning the Nairobi gubernatorial after pairing Mike Sonko with Polycarp Igathe.

Deputy President William Ruto backed the team, describing Senator Sonko, who is Jubilee Party’s nominee for the county’s top job, as the solution to the problems facing the capital.

At a press conference he personally managed, ushering speakers and arranging how they will sit, the DP said the Jubilee Party leadership fully supported Mr Sonko, who has picked Vivo Energy Kenya Managing Director Igathe to become his running mate.

“Under the leadership of these two gentlemen, we actually have a winning team. We can now do the things we have so much wanted to do as Jubilee administration in Nairobi,” said the DP at the Jubilee Party headquarters in a three-minute speech he made after unveiling the duo.

For the Jubilee Party in 2013 elections, having not won Nairobi, which controls up to 60 per cent of the country’s gross domestic product besides being the seat of power, has haunted them for the past four and a half years.

“This team understands the challenges of this city and are going to provide the solutions for the problems this city faces. And they have the right partnership with us to make sure that Nairobi truly becomes the City in the Sun, again,” Mr Ruto said.

Mr Sonko, a streetwise politician and a ruthless mobiliser, has cut the image of a man who has related with the hoi polloi, the chunk of the 2.3 million voters in the city.

To clinch the Jubilee Party ticket, however, the senator had to fend off challenge from 2013 presidential candidate Peter Kenneth, who had painted himself as the manager that Nairobi needed.

Mr Kenneth’s team had hoped to win the primaries by painting Mr Sonko as an erratic leader hell-bent on violence and unqualified to lead the city.

But, like a man fresh from being baptised, the senator had taken Mr Kenneth’s advice, debuting a new image, one he hopes will catapult him to the helm of City Hall.

Gone are the heavy gold and diamond rings and chains, the multicoloured mohawk and dyed hair, the ripped jeans, and punching of walls or sleeping on the tarmac.

On Wednesday, he once again portrayed the new image, one donning a business suit, and choosing his words carefully.

“I have been like the de facto governor because all the complaints by the county residents have been brought to me for action and mainly issues regarding land grabbing which incumbency has never addressed,” Mr Sonko said in a five-minute prepared speech.

“As you will see from our manifesto, which we will be unveiling shortly, our agenda for this county is issue-based and will be anchored on good governance, transparency and I shall not entertain any form of corruption in whichever form.”

He promised to tackle corruption, address garbage collection, which he said had been taken over by cartels, restructure the City Inspectorate Department and address drainage and cleanliness, a job he said he will accomplish with Mr Igathe.

“You will appreciate my choice of running mate reflects the corporate governance image that the residents of Nairobi would like to serve them and his CV in corporate leadership speaks for itself,” he said of Mr Igathe, who he said will run policy, development and political affairs.

Mr Igathe, who said he went through a rigorous interview to win the seat with 11 others, said he will complement his boss, if they win. “I took a leap of faith and left a job at the private sector for politics because 60 per cent of our country’s GDP in Nairobi can no longer be left in the hands of clueless people,” he said.

Jubilee Party confident of winning Nairobi gubernatorial seat Reviewed by samrack on May 17, 2017 .