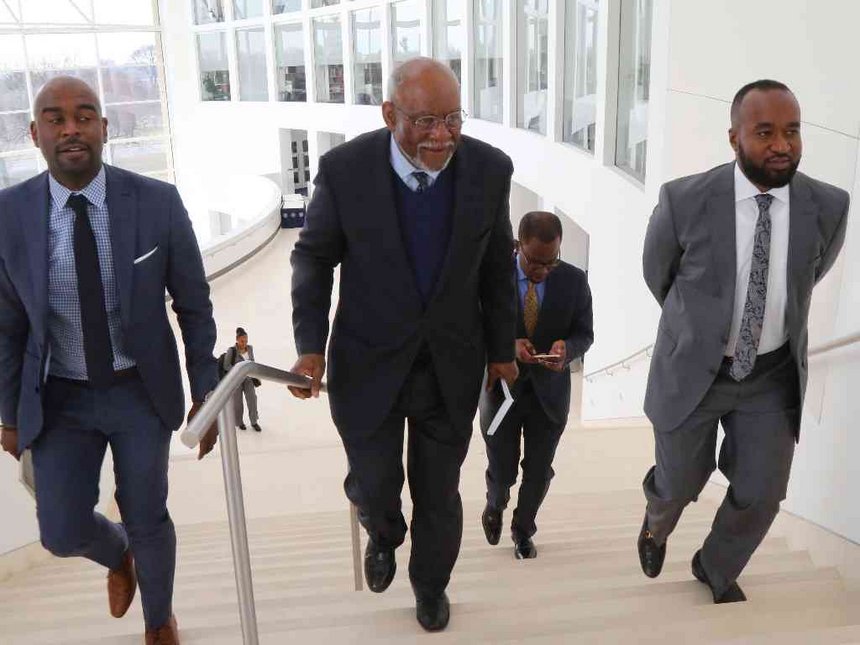 Mombasa governor Hassan Joho (right) with former US Ambassador Johnnie Carson (center), who is now a Senior Advisor at the United States Institute of Peace (USIP) during a round-table meeting in US.Photo GPS

Mombasa Governor Hassan Joho’s trip to the United States of America is a major boost in efforts to clear his name against allegations of drug dealings, political analysts have said.

In what is seen as a ‘public relations’ stunt aimed at vindicating Joho, over drug dealings, he has been active on social media over the official meetings he has been attending.

The move, seen as a bold one by analysts, is aimed at reiterating his stand a few weeks ago, in which he sought to have the government probe him over drug dealing issues, saying he is clean.

Joho’s trip has sent a strong statement back in Kenya, and in the Coast region, even as he tries to curb a different image from that of politics.

The Mombasa Governor, who is attending a series of meeting of the Strong Cities network in Washington DC, left the country last Wednesday and is expected to be back by today.

Pwani university don, Rocha Chimera, says Joho seized the opportunity in the counter-violence extremism meetings, to place himself in the map.

“Joho is presenting an image to show that he is more than a capable leader, and with his eyes set for the presidency in 2022, he has all reasons to remove any stumbling block in his way,” said Chimera.

Chimera said even though Joho was welcomed officially in the Cities meeting, he knew there was no other better way to try proof his innocence.

There have been reports that Joho, may be an associate of the late drug baron Ibrahim Akasha’s sons, who were recently deported to the US to face drug trafficking and related offences.

Joho has been trying to fight off the tag, and has accused the government of trying to fix him so that he doesn’t defend his seat in the coming elections.

“As politicians who were recently implicated in the drugs trade refuse or fear to go to the US, Joho is walking straight to the lion’s den to prove to all that he cannot be bitten,” added Chimera.

Some of the politicians reached by The Star to comment chose not to give any views over the issue.

His Director of Communications Richard Chacha, however said Joho is putting on a different cap as he tries to share on counter-violence extremism.

Some analysts say the tour has been a major boost to Joho, as he has been seen to be on the forefront to fight radicalisation, coming from a region where the vice is rampant.

“Joho seems to have pulled a first on Jubilee, since he is dinning and rubbing shoulders with the mighty. We may not know the Drug Enforcement Administration operations, but if indeed they had tangible evidence on him, they would have capitalised on his trip maybe to get hold of him,” said development analyst Tom Mwambeyu.

Chacha further said that the main aim of Joho’s trip is to bring together different sides and views over the radicalisation fight, and get elements which he would replicate in Mombasa.

“Joho is putting up a different cap and adding on to his political accolades, since he has given a towering position over his stand on matters radicalisation,” added Chacha.

Joho who was accompanied by Education county executive Tendai Mtana and three other county officials.

During his tour, he met former US ambassador to Kenya, Johnnie Carson, who is now a senior advisor at the United States Institute of Peace, and also had a round-table meeting with senior program officers working closely with Mombasa and other key cities.

He also met with members of the Kisii and Somali communities in Minessota, and engaged Kenyans on issues related to their lives in the US and their take on current affairs in Kenya.

In what has been termed as the “Mombasa story”, Joho is pushing on the need for cities and nations to rethink the global war on violence extremism and terrorism.

According to his tweeter updates, Joho also took time to market Mombasa as a port city.

He held meetings with officials from the US department of Homeland Security and also met Eric P. Whitaker, Deputy Assistant Secretary, Bureau African Affairs and was at the All Dulles Area Muslim Society (ADAMS), which is one of the largest mosques in the United States, and serving 5000 Muslim families.

Joho’s trip to the US a strategy ‘to shake off drug baron tag’ Reviewed by samrack on February 24, 2017 .