John Piper Answers the Question, Will I Be Single for the Rest of My Life? 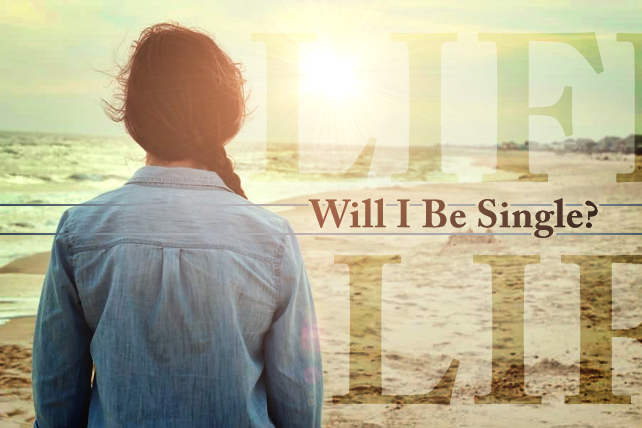 John Piper Answers the Question, Will I Be Single for the Rest of My Life?

Based on the inbox, Pastor John, there are a lot of Christians listening to the podcast who did not expect to be single entering 2017. Ashley, one of our listeners, is among them.

She writes in to ask this: “Pastor John, my struggle is singleness. I’m 28, an elementary teacher, and that’s not really a profession to meet single men. I know that with the age of Tinder and hookups, casual sex will leave me empty inside, and it’s not a lifestyle that I’m seeking. At the same time I feel alone as a Christian single. I feel the church only sees me as ‘serving’ material because I have ‘time to serve.’ In addition to the lack of men at church, I am an extrovert. I do have a life outside of my singleness and try to live as if my singleness doesn’t define me. Everyone tells me I’m attractive, outgoing and have a lot going for me. Well, everyone but a Christian male. Which is hard not to take personally. How do I have hope in something uncertain? I’m not promised a life of marriage. How do I cling to the truth in a world lying to me about the satisfaction of ‘hooking up’? How do I not turn to the world when I feel like the church, Christian men and even God himself seem to have no place for me?”

There is so much there that we could talk about. What is clear from the way Ashley asks her question—and I am going to determine what I say here because of what I hear in the way she asks the question—what is clear is that she knows at one level the essence of the right answers to her own questions. She asks with regard to a future husband: How do I have hope in something uncertain? And she answers: I am not promised a life of marriage.

In other words, she knows we don’t hope in uncertain things. We don’t put our hope in what we are not promised. If we do, we are bound to be crushed. We hope in things that are certain, not uncertain; things that God has promised, not things that we may rightly want, but have not been promised and may receive or may not receive. We hope in what is sure, what God has absolutely promised, and he watches over his word to perform it (Jeremiah 1:12). Ashley knows this. And so, she asks: How do I not turn to the world when I feel like the church, Christian men and God have no place for me? And she answers: The world is lying to me about the satisfaction of hooking up. She knows it is a lie. She knows it is a lie.

Now, my concern for Ashley—and many are like her, and we are all like her from time to time—my concern for Ashley is that the lie is already starting to creep into the way she asks her question. This is exactly the way Satan insinuated his lie into Eve’s mind in Genesis 3. And I don’t want Ashley to become another Eve in the garden. Here is what God said: “Now the serpent was more crafty [or subtle] than any other beast of the field that the Lord God had made. He said to the woman, ‘Did God actually say, “You shall not eat of any tree in the garden”?’” (Genesis 3:1–2). Now, you see already what he is doing. God only forbade one tree. But Satan is insinuating the thought that God is stingy and forbade all the trees. Tragically, that seed of God’s stinginess took root in Eve’s mind and you can see it immediately.

The text goes on, “The woman said to the serpent, ‘We may eat of the fruit of the trees in the garden, but God said, “You shall not eat of the fruit of the tree in the midst of the garden”’”—and then she adds—“‘“neither shall you touch it, lest you die.”’” God did not say that. God did not say, “You shall not touch this tree.” But Eve was already feeling the lure of resentment against God. God is withholding something from me in my life and I don’t like it. He is a stingy God. He is a narrow God. He doesn’t have my best interest at heart. So, when Ashley says, “I feel like the church, Christian men and God have no place for me,” we may understand and empathize with the feeling, but alarm bells should be going off in her and our minds that the lie of Satan is taking root in the statement: God has no place for me.

So, in answer to Ashley’s question, “How can I not turn to the world?” even though she knows the world is lying, my answer is: Swim in the truth. Swim in the truth of God’s word and promise about you, Ashley. You will know the truth, and the truth will set you free from the lies of the world and the devil. That is what Jesus meant when he said that in John 8:32.

Let me point you, Ashley, to one truth. We could do dozens. But here’s one truth big enough for you to swim in for a long time: When Jesus was teaching about marriage and he told his disciples there is no back door—once you walk in, you are committed for better or for worse till death separates you: no back door—the disciples were stunned that Jesus shut the back door of marriage. And they said, “If such is the case of a man with his wife, it is better not to marry” (Matthew 19:10).

Then Jesus said something even more amazing: Not everyone is able to enter this relationship with such a high demand. And then he uses the word “eunuch” to describe different kinds of people who don’t enter marriage. Here is what he says in Matthew 19:11, “Not everyone can receive this saying”—this high expectation of marriage without a back door—“but only those to whom it is given”—in other words, only divine grace. “For there are eunuchs who have been so from birth, and there are eunuchs who have been made eunuchs by men, and there are eunuchs who have made themselves eunuchs for the sake of the kingdom of heaven. Let the one who is able to receive this, receive it” (Matthew 19:12).

Now, however literal we may take the word “eunuch” here, the implication is that there are various reasons why people are not called into marriage. Some forgo it unwillingly, some willingly. What does the Bible have to say about God’s grace toward them? What about their happiness and blessing? And the answer that God gives is found most beautifully in Isaiah 56. He pictures two kinds of people who feel explicitly or especially excluded: the foreigner, the Gentile who is not part of Israel, and the eunuch who feels fruitless and like there is no future for him because he has no family. Here is what he says:

Let not the foreigner who has joined himself to the Lord say, “The Lord will surely separate me from his people”; and let not the eunuch say, “Behold, I am a dry tree.” For thus says the Lord: “To the eunuchs who keep my Sabbaths, who choose the things that please me and hold fast my covenant, I will give in my house and within my walls a monument and a name better than sons and daughters. (Isaiah 56:3–5)

Now, pause there and let that sink in. Do you believe this, Ashley? That is the question. God says he will give a monument and name that will last and be more satisfying than any husband’s names and children’s names and people surrounding you with family. And then he goes on, “I will give them an everlasting name that shall not be cut off” (Isaiah 56:5). Do you think your name or your identity will not be perpetuated because there are going to be no children bearing your name—no one carrying your DNA? There is something better, God says, something better that God has for you: an everlasting name.

So, Ashley, you are asking, “How can I turn from the world?” The way to turn from the world with its lies is to stop focusing on the world and its deceptive images of pleasure, but rather to focus on the infinitely superior promises of God. And this is one of those hundreds of promises. I don’t know if God has marriage in your future. He might. You never know. But I do know this: He will give you in his house and within his walls a monument and a name better than sons and daughters, an everlasting name that shall not be cut off. And don’t miss the thing that you are most concerned about; namely, that God has no place for you. It says: I will give you this in my house. He does want you there. He wants you there. And to be wanted by God is better than being wanted by a thousand men.

John Piper Answers the Question, Will I Be Single for the Rest of My Life? Reviewed by samrack on April 17, 2017 .

Pic: Photo Courtesy John Piper Answers the Question, Will I Be Single for the Rest of My Life? Based on the inbox, Pastor John, there are a lot of Christians listening to the podcast who did not expect to be single entering 2017. Ashley, one of our listeners, is among them. She writes in to