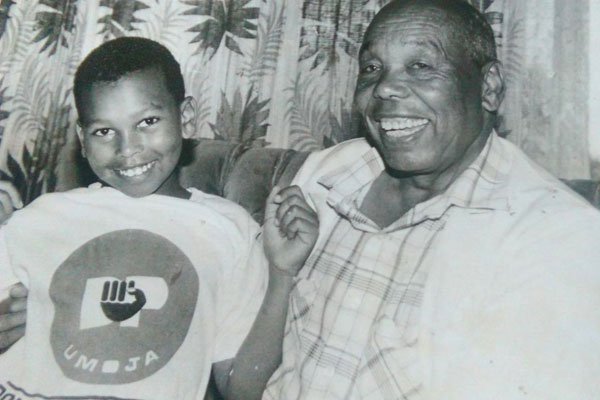 The late John Keen with one of his sons, Somoire, at his home on January 20, 1992. FILE PHOTO | YUSUF WACHIRA | NATION MEDIA GROUP

Veteran politician and Maasai elder John Keen, who served as an assistant minister, has died aged 90 according to the family spokesman Antony Keen.

Mr Keen died at Aga Khan Hospital in Nairobi at 1.30am on Sunday while undergoing treatment.

He was admitted at the hospital on Thursday after falling ill.

Deputy President William Ruto is among the politicians who expressed their condolences to the family through social media.

“The late Keen was a defender and campaigner of human rights especially those of the Maa Community.

“He was on the forefront of championing democracy and freedom of expression. He served the people of Kenya diligently and with passion.

“He was an able, dedicated and hardworking public servant. My condolences goes to his family and constituents, whom he ably represented,” Mr Ruto posted on Twitter.

His son Bernard Keen, said that his father was hardworking, a mentor who made sure that all of his children got good education.

“My father was a great man who loved school. He made sure we all got quality education. We will all miss him,” he said

The late Keen leaves behind four wives and more than 10 children and grand children. The body is lying at the Lee Funeral Home and according to his son Antony the burial will take place on December 30, 2016.
“My father’s wish was to be buried as soon as possible,” said Antony.

The late John Keen with one of his sons, Somoire, at his home on January 20, 1992. FILE PHOTO | YUSUF WACHIRA | NATION MEDIA GROUP John Keen, prominent Maa politician dead at 90 Veteran politician and Maasai elder John Keen, who served as an assistant minister, has died aged 90 according to the family