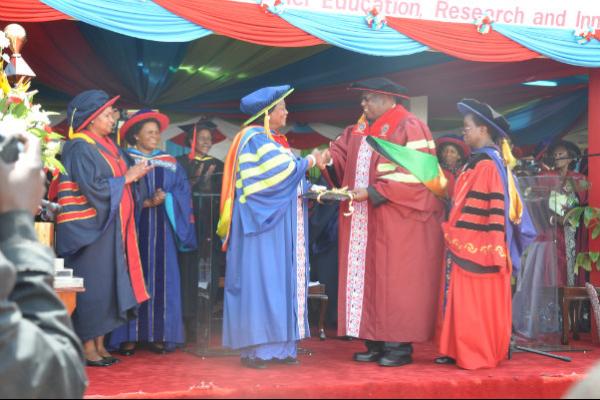 President’s mother Mama Ngina Kenyatta has been conferred an honorary Doctorate degree in Entrepreneurship by Jomo Kenyatta University of Agriculture and Technology.

Mama Ngina was among 4,000 graduates conferred with diplomas and degrees in various disciplines during JKUAT’s 25th graduation ceremony on Friday.

She was honored for her sharp business acumen in business that has seen the Kenyatta family expand its business empire to the East African region.

Born Ngina Muhoho in 1933, Kenya’s first First Lady is said to have been married off young in 1951 as a gift to Jomo Kenyatta.

Chancellor Geoffrey Ole Maloiy presided over the event which saw 59 graduates awarded doctorate degrees, the highest number to be conferred by the university in one ceremony.

Maloiy said the university, through the Africa-ai-Japan project, will strengthen postgraduate training and research in agriculture, food security, molecular biology, biochemistry and engineering.

He said this financial year Sh25 million will be spent on implementing the initiative, which is being supported by Japan International Cooperation Agency.

He urged university students to respect their seniors and uphold respect, tolerance and creativity in their everyday activities, asking them to shun “misguided practices.”

Education PS Collette Suda commended the university for engineering ingenuity and versatility in the development of the Taifa Laptop project to meet Kenya’s technological needs.

She said the first beneficiaries of Free Primary Education will join university in September 2015, with JKUAT slated to admit 3, 567 through the Kenya Universities and Colleges Central Placement Service.

Suda urged the graduands to desist from practices like terrorism and instead invest their talent, knowledge and energies in productive activities.

“The University has as well established the Intellectual Property and Industry Liaison Office (DIPUIL) to take stock, protect and commercialize JKUAT’s intellectual property,” she said.

The acting Council Chairperson, Bertha Dena pledged that her team would work towards positioning JKUAT to play a leading role in training, research and innovation.