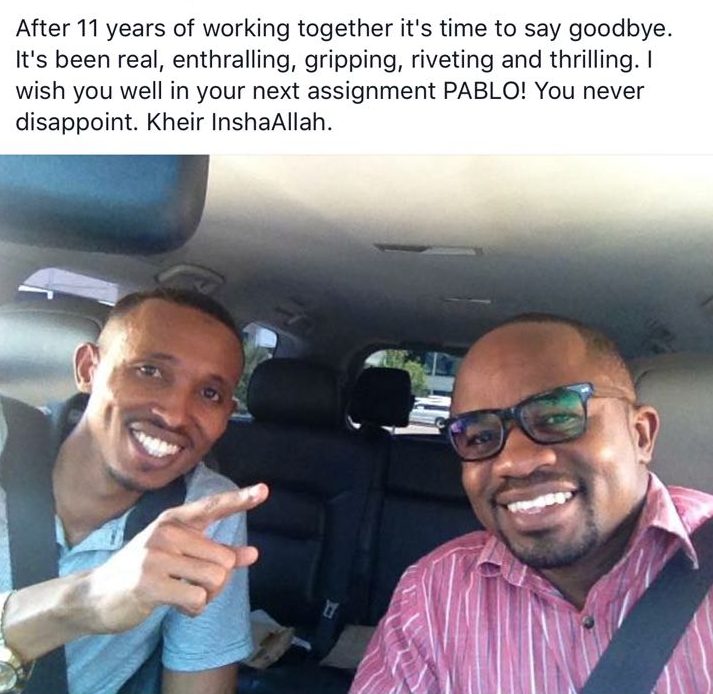 The popular investigative series that airs on KTN might be at risk of being dropped or abandoned. Here is why.

The lead man and brains behind the investigative series has left the show to go seek out greener pastures.

The series brought Mohamed Ali a lot of fame and recognition for his various investigatives like Kifo cha Mende, The Jacob Juma investigative series’, Kibubusa Cha Kanjo and ofcourse the episodes on The Truth Behind Westgate Shopping Mall Attack.

Here are reactions from Kenyans about one of the investigative series.

Anyhow, a media personality pal of Mohamed Ali, Mate Habib may have let the cat out if the bag before Mohammed Ali officially announced his exit from media to get into politics.

“AFTER 11 YEARS OF WORKING TOGETHER IT’S TIME TO SAY GOODBYE. IT’S BEEN REAL, ENTHRALLING, GRIPPING, RIVETING AND THRILLING. I WISH YOU WELL IN YOUR NEXT ASSIGNMENT PABLO! YOU NEVER DISAPPOINT. KHEIR INSHAALLAH.”

Check out the screenshot with the goodbye message.

It has been an open secret that Mohammed Ali may be getting into politics but he has not made the bold move yet.

From his social media posts one can tell that he is positioning himself to be a mwana siasa.

In one of his posts, Mohammed Ali writes,

‘I Had Vowed Never To Marry A Politician,’ IDA ODINGA Makes Explosive Confession About Raila

I AM IN THE RACE: #KenyansForMohaJichoPevu

I AM IN THE RACE: #KenyansForMohaJichoPevu
1st March 2017. Today I officially declare that I am in the race to be the next Member of Parliament for Nyali Constituency. I have stood up for you for over a decade, and used my voice to amplify yours. Now, I ask you to stand with me. Inside the National Assembly, there is a quote that says “For the just government of men.” Yet Justice has fled from that once honourable house. Help me take Justice to their doorstep. Whatever you can contribute will go a long way to helping me on this journey. You can send your cash donations to MPESA PAYBILL NUMBER: 652464. ACCOUNT IS YOUR NATIONAL ID NUMBER OR CELLPHONE NUMBER. You can also deposit your contributions KCB TOWN BRANCH, MOMBASA, ACCOUNT NUMBER 1203272731. ACCOUNT NAME: MOHAMED ALI. Thank you Kenya!

Jicho Pevo joins politics to vie for Member of Parliament for Nyali Constituency Reviewed by samrack on March 1, 2017 .

Share thisFacebookTwitterPinterestEmailWhatsAppJicho Pevo joins politics to vie for Member of Parliament for Nyali Constituency The popular investigative series that airs on KTN might be at risk of being dropped or abandoned. Here is why. The lead man and brains behind the investigative series has left the show to go seek out greener pastures. The series