Issues that will arise in readiness for rerun 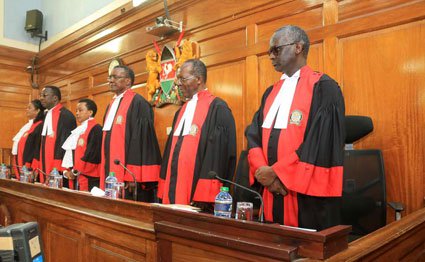 Supreme Court judges prepare to present their ruling on the presidential poll petition on September 1, 2017. They found fault in the transmission of results, saying there were irregularities and illegalities. PHOTO | JEFF ANGOTE | NATION MEDIA GROUP

Issues that will arise in readiness for rerun

In a majority decision, the judges pinned the blame on the Independent Electoral and Boundaries Commission (IEBC), saying that it “committed irregularities and illegalities” in the transmission of results”.

The consequences of that decision began to be felt immediately, with National Super Alliance (Nasa) presidential candidate Raila Odinga saying immediately that his party has no confidence in IEBC.

After deciding that the presidential election was not properly conducted, the Supreme Court ordered that a fresh election be conducted within 60 days.

This means that the election will not be limited to President Uhuru Kenyatta and Mr Odinga. It will be an open contest.

The criticism on the IEBC could however result in pressure on the top leadership of the commission to leave office.

SECRETARIAT
Later in the day, IEBC Chairman Wafula Chebukati said he and his team would await the full judgement to decide the next course of action.

He however announced an internal reorganisation in the secretariat.

Political pressure could also arise around the printing of the ballot papers for the fresh election as well as the forms used to compile the result.

Questions could also arise around the integrity of the transmission system and the gadgets used to identify voters and transmit the results.

FAILURE
Justices Njoki Ndung’u and Jackton Ojwang’ differed with their four colleagues, saying that while they agreed that mistakes happened in the electoral process, the extent was not sufficient to affect the credibility of the outcome.

The two said that Mr Odinga failed, in their view, to present material evidence, to the standard required, to upset the results returned to the National Tallying Centre.

They said the results relayed to Bomas of Kenya were counted and agreed upon by agents at the polling station, and they remained unchallenged.

However, four judges led by Chief Justice David Maraga said the electoral body failed, neglected or refused to conduct the presidential poll within the dictates of the Constitution and the provisions governing the electoral laws.

The four judges absolved President Kenyatta of any wrongdoing.

PETITIONERS
They however found fault in the transmission of results, saying there were irregularities and illegalities, particulars and the substance of which will be given in the detailed of the court in the next 21 days.

“A declaration is hereby issued that President Uhuru Kenyatta was not validly declared as the President-elect and that the declaration is invalid, null and void,” Mr Maraga ruled.

The decision was welcomed by the two petitioners who described the decision as historic, pointing out that it had made Kenya proud.

“For the first time in Africa a court has nullified a presidential election. This is historic and a triumph of the Kenyan people,” Mr Odinga, who was in court alongside other Nasa principals, said.

NO FAITH
His deputy Kalonzo Musyoka said he was proud to be a Kenyan and the decision had restored the dignity of the Supreme Court.

However, the three leaders introduced a political question in the matter.

They declared they had no faith in the commission and its chairman, Mr Chebukati.

“Impunity must be punished,” Mr James Orengo, who was leading the team of lawyers representing Mr Odinga, said.

They demanded Mr Chebukati and the commissioners be punished for the malpractices identified by the court.

“My client wants to see in your detailed judgement and the exact incidences of malpractices that warranted the nullification of the will of the people,” he told the court after the judgment was delivered.

Senior Counsel Paul Muite, for IEBC and Mr Chebukati, said the court had “wrongly or rightly” spoken with clarity and the decision is final.

“The court has given Kenyans an opportunity to restate with clarity, who they want to have as their president,” he said.

Addressing the nation after the ruling, President Kenyatta faulted the Supreme Court for nullifying his win, but vowed to respect the ruling and seek a new mandate from the people of Kenya in a fresh election.

He said he was disappointed with the court decision, but was optimistic that it offered him a second chance at the ballot.

The judges faulted the IEBC, saying it failed to conduct the presidential election in accordance with the principles laid down in the Constitution and the law relating to elections.

After issuing the judgment, Mr Maraga, who is also the President of the court, urged Kenyans to maintain peace.

He said that an election is a process and not an event and pleaded with lawyers to help the country in maintaining peace.

VOTERS
Lawyer Stephen Mwenesi for the Law Society of Kenya said the decision was part of the process and on behalf of the society, he thanked the court and hoped that its direction will be adhered to.

Addressing a press conference at the Okoa Kenya Centre last evening, Mr Odinga said they will not participate in the new polls with the current IEBC office holders.

He accused IEBC of subverting the will of Kenyans by conducting a questionable poll.

Mr Brian Asin, Mr Ben Wanasakaami and Mr Kevin Alwang’a have in their urgent petition filed Friday, urged the High Court to bar the IEBC officials from holding the repeat elections as directed by the Supreme Court, arguing that their integrity to hold credible elections has been put in disrepute.

Their application will be heard next week.

Issues that will arise in readiness for rerun Reviewed by samrack on September 1, 2017 .

Supreme Court judges prepare to present their ruling on the presidential poll petition on September 1, 2017. They found fault in the transmission of results, saying there were irregularities and illegalities. PHOTO | JEFF ANGOTE | NATION MEDIA GROUP   Issues that will arise in readiness for rerun Kenya will now hold a fresh presidential