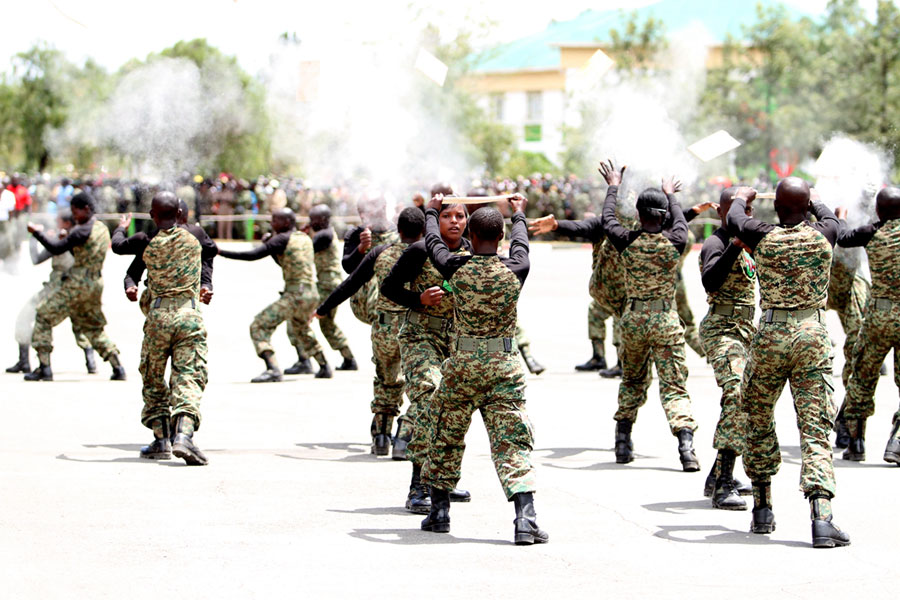 Orange Democratic Movement leaders on Wednesday accused the Jubilee administration of creating a youth militia through the National Youth Service.

The opposition party has demanded that the outfit be audited to verify the content of its curriculum and expenditure and its ethnic composition.

ODM also demanded a review of the contracts entered into by the Ministry of Devolution and Planning, which involve NYS (pictured above during pass-out) as well as “hidden expenditures”.

The party also alleged that the outfit was involved in importing sugar and rice through the Somali port of Kismayu. However, ODM Chairman John Mbadi did not substantiate the allegations.

According to Mr Mbadi, the demonstrations witnessed in Nairobi on Monday were a confirmation that the rebranding of the NYS amounted to the creation of a militia.

“We are fully aware that the ethnic and gender composition of the recruitment to the NYS is skewed at favouring a particular ethnic group with the intent of propagating violence in the run-up to, during and after the 2017 General Election,” Mr Mbadi claimed when he and other Opposition MPs addressed a press conference at Orange House in Nairobi.

The party also condemned the violence that broke out after confrontations in Kibera on Monday night. They said ODM was against all acts of political hooliganism, regardless of the political affiliation of those behind such acts.

The MPs were referring to the burning of a toilet and the demolition of part of a clinic by rowdy youth in Kibera. The incident was widely criticised on social media on Tuesday.

‘USED TO COVER UP’

Two youth groups — one claiming to support the NYS projects in the slum and another opposed to them — clashed on Monday evening and a public toilet built by the NYS was set ablaze later in the night. On Tuesday, there were reports that the two groups also had a confrontation early in the morning.

“We appeal to residents of Kibera to continue living in harmony as they have over the years. The youth in Kibera must not allow themselves to be used to cover up for Jubilee’s theft that now permeates virtually every ministry,” said Mr Mbadi.

He blamed the mobilisation of youth “dressed in NYS T-shirts who engaged in violent political activity in Nairobi” for the confrontation. According to Mr Mbadi, the projects undertaken by the NYS in Kibera were government political tools and not a sincere attempt to help slum dwellers.

He said the Ministry of Devolution had taken over the role of the county government.

“The purported projects are functions under the county government and one level of government cannot determine what it wants to do to the function of another without negotiating,” said Mr Mbadi.

He added that the government cannot purport to care for the youth when it spends Sh25 billion on the NYS, yet the Youth, Women and Uwezo funds got less that Sh2 billion.

Other ODM leaders asked President Uhuru Kenyatta to sack Ms Anne Waiguru, the Cabinet secretary for Devolution, to pave the way for investigations into the financial transactions of the NYS.

Ugunja MP Opiyo Wandayi said he had given a notice to discuss the NYS in Parliament as a matter of national importance on Wednesday.

Meanwhile, the Political Parties Liaison Committee on Tuesday criticised the destruction of buildings in Kibera and called on Inspector-General of Police Joseph Boinnet to arrest all those involved.

The committee’s secretary-general, Mr Osman Hassan, who read a written statement at a press conference the committee had convened in Nairobi, said the culprits should be brought to book.

“Let the law take its course,” he said. He was accompanied by the committee’s chairperson, Ms Wavinya Ndeti, and other officials.

“We are advising our youths not to allow themselves to be used by politicians to perpetrate violence,” said Ms Ndeti.

The committee also extended sympathies to traders at the Gikomba Market who lost property worth millions of shillings in a fire on Tuesday.

Share thisFacebookTwitterPinterestEmailWhatsApp Orange Democratic Movement leaders on Wednesday accused the Jubilee administration of creating a youth militia through the National Youth Service. The opposition party has demanded that the outfit be audited to verify the content of its curriculum and expenditure and its ethnic composition. ODM also demanded a review of the contracts entered into