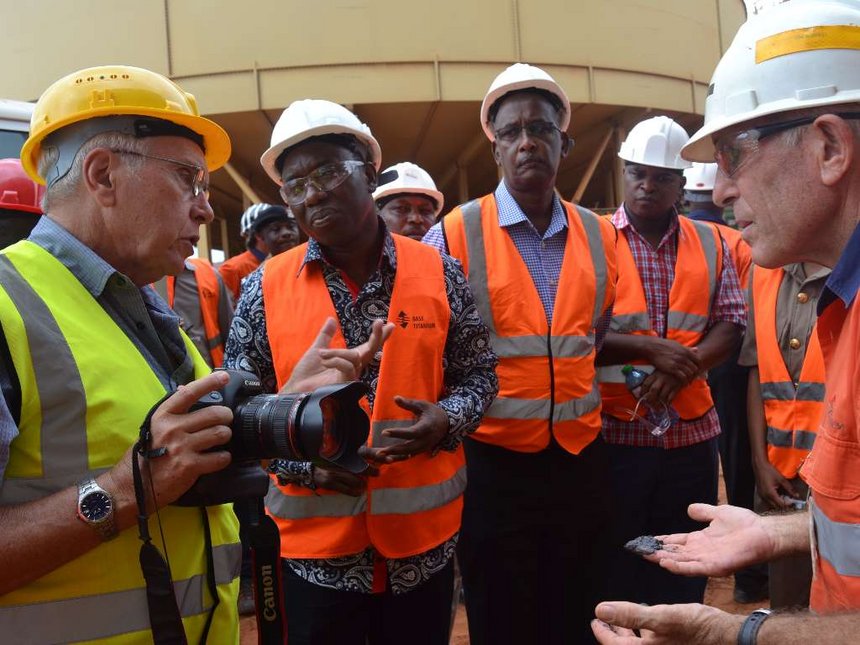 Base Titanium general manager Joe Schwarz (left) and mining manager Vaughan Shaw (right) discussing with the Mining CS Dan Kazungu and PS Ibrahim Mohamed on Thursday 21 January 2016 when they toured the Maumba mining site where Rutile, Zircon and Ilminite is mined for export. Kazungu said the national government will partner with Base Titanium mining company in selling the country as a mining destination abroad . Photo by ALLOYS MUSYOKA

UK firm to guide survey on minerals in Kenya

British consultancy, International GeoScience Services Ltd, has won a multi-million-shilling deal lead the search for a firm that will undertake an aerial geophysical survey on the country’s mineral deposits.

Mining CS Dan Kazungu said the companies were picked from a pool of 17 firms that had bid for the consultancy work.

“We had 17 international companies that had applied from UK, Finland, Denmark, South Africa, Japan , and Australia. We narrowed them down to five, we went into technical and financial proposals where we went from to the final one,” Kazungu told the Star in an interview.

The firms will work with a team of 16 Kenyan geologists to select a contractor for the survey expected to commence in the first quarter of 2017, the CS said.

“We have presented the results to the AG. The consultants together with the 16 geologists will put out the tender to look for the contractor who will actually do the airborne survey. We hope the tender will come out as soon as possible so that we can get the contractor for the process to begin,” he said.

IGS is pleased to announce the winning of a major new contract in Kenya. This work, titled ‘Provision of Consultancy Services for Development of Specifications, Terms of Reference and Supervision of a Countrywide Integrated Airborne Geophysical Survey for Mineral Resources of the Republic of Kenya’ is funded by the Government of Kenya and led by IGS in partnership with PGW of Canada, with whom IGS have already won several other recent contracts elsewhere.

Dr Peter Zawada, Managing Director of IGS, said “I am very pleased that IGS has won this very important contract which demonstrates our competitiveness and further establishes our reputation in international geoscience consultancy”.

He said the selected team will form an evaluation consortium “to ensure that the project is done according to the Kenyan wish and values”.

Treasury CS Henry Rotich allocated Sh3 billion for the first phase of the survey in the 2016-17 financial year that ends next June.

The survey is aimed at identifying mineral deposits and their locations across the country, making it easy for the country to attract investors.

Geophysical survey is the systematic collection of geophysical data for spatial studies. It involves a variety of sensing instruments, and data may be collected from above or below the earth’s surface.

Kazungu said the first phase of the survey will cover the Western, Coast and Eastern blocks which have high potentials for gold, mineral sands, coal, copper and iron ore.

The second phase will cover the Rift and Northern blocks.

“We want to create a conducive environment for investors to boost the country’s earnings from the mining sector,” Kazungu said.

The renewed plans to conduct a geophysical survey come after three years of unsuccessful discussions with China’s Geological Exploration Technology Institute to undertake the exercise with grant from Chinese Government.

IGS wins major contract in Kenya:UK firm to guide survey on minerals in Kenya Reviewed by samrack on December 28, 2016 .

Share thisFacebookTwitterPinterestEmailWhatsAppBase Titanium general manager Joe Schwarz (left) and mining manager Vaughan Shaw (right) discussing with the Mining CS Dan Kazungu and PS Ibrahim Mohamed on Thursday 21 January 2016 when they toured the Maumba mining site where Rutile, Zircon and Ilminite is mined for export. Kazungu said the national government will partner with Base