Home  › Africa › Diaspora › Kenya › Kenya Diaspora News › News › Politics › U.S Diaspora › If Raila had been loyal to Kibaki, he would have been president today and Uhuru his DP- Mutahi Ngunyi 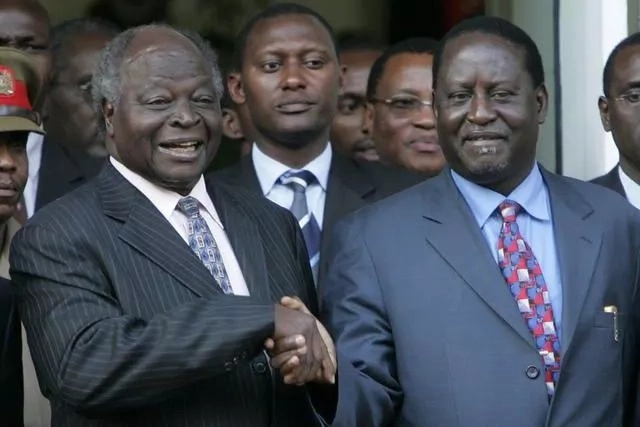 Mutahi Ngunyi, a political analyst inclined to the Jubilee Party believed opposition leader Raila Odinga would have been president today – Ngunyi said Uhuru would have been Raila’s deputy waiting to ascend to power in 2022 – He also added that Raila failed to clinch the presidency because he failed to keep his word to Kibaki and that he was too impatient Controversial political analyst Mutahi Ngunyi was of the opinion that opposition leader Raila Odinga would have been president today had he kept his word to former president Mwai Kibaki. According to his recent Fort Hall School of Government argument on Saturday, January 13, Ngunyi claimed Raila would have succeeded Kibaki and President Uhuru Kenyatta wouldn’t have become president in the 2013 General Election.

n 2002, Raila Odinga put aside his presidential ambitions and campaigned for Mwai Kibaki under the ‘Kibaki tosha’ slogan. This was during the time when the opposition came together to remove former president Daniel arap Moi from office after ruling for 24 years. Kibaki went on to win. According to recent reports during the 2017 election campaigns, the National Super Alliance front-runner, Raila Odinga, said he expected that Kibaki would rally the GEMA community behind him for his next stab at the presidency in 2007 but this was not to be. READ ALSO: Mind your own business – NASA supporters tell off Senator Murkomen over Baba’s swearing-in Mwai Kibaki (l) and Raila Odinga in 2007 after a Grand Coalition government was negotiated. Photo: Nation.  Kibaki beat Raila in the 2007 elections but the opposition disputed the outcome. Post election violence erupted and former UN secretary general Koffi Anan negotiated a Grand Coalition government that would see them run the country together with Raila as the prime minister. In 2013, Raila vied for presidency again and said he did not need Kibaki’s endorsement because it would be opportunistic of him, and that Kibaki had the right to support a candidate or remain neutral. In both the 2013 and 2017 election thereafter, Raila was defeated by President Uhuru Kenyatta on both occasions.

President Uhuru was sworn in for a second and final term on Tuesday, November 28, after wining the repeat presidential election. Photo: Uhuru Kenyatta/Facebook. Raila disputed the outcome of the 2017 elections and is intent on being sworn in as the people’s president on Tuesday, January 30, after the opposition said they neither recognised the outcome of the August 8 and October 26 elections nor Uhuru’s legitimacy in office.

If Raila had been loyal to Kibaki, he would have been president today and Uhuru his DP- Mutahi Ngunyi Reviewed by samrack on January 16, 2018 .