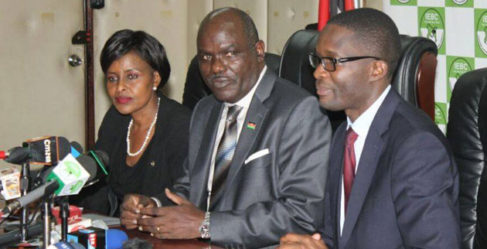 One of the ICT Managers at the Independent Electoral and Boundaries Commission has mysteriously gone missing, nine days to the General Elections set for August 8.

The commission Chairperson Wafula Chebukati said the official was last seen on Friday, and had sent a text message to his colleague at 3 am on the same day.

“The Commission wishes to notify the public that one of its ICT Managers was last seen on Friday night. Efforts being made to trace him,” Chebukati said in a statement.

He said the matter had been reported to police.

A senior CID officer later told Capital FM News that their investigations had shown that the ICT Manager was last seen on Mombasa Road while driving in the company of a female passenger. “We are still investigating the matter to try trace him because CCTV cameras captured his vehicle with a male driver and female passenger on board and that was at about 2.30am on Friday.”

Inspector General of Police Joseph Boinnet at a news briefing Sunday said, “we have received the repor of a missing IEBC official and the matter is being investigated.” He did not offer more details.

In the IEBC statement, Chebukati did not give the identity of the missing official, or state the number of ICT officials working for the commission, but left no doubt that missing official must be playing a critical role in preparation for the elections.

The commission’s ICT Director is James Muhati who was reinstated recently after a 30-day suspension when he was sent on compulsory leave on accusations of failing to cooperate with other government agencies which were auditing systems at the polls body.

Chris Musando was named to replace him in an acting capacity.

The disappearance of the official a week to the elections is likely to raise questions, particularly from the Opposition which has been raising concerns at the level of IEBC’s preparedness and handling of the electoral process.

IEBC’s ICT manager goes missing a week to elections One of the ICT Managers at the Independent Electoral and Boundaries Commission has mysteriously gone missing, nine days to the General Elections set for August 8. The commission Chairperson Wafula Chebukati said the official was last seen on Friday, and had sent a text message to