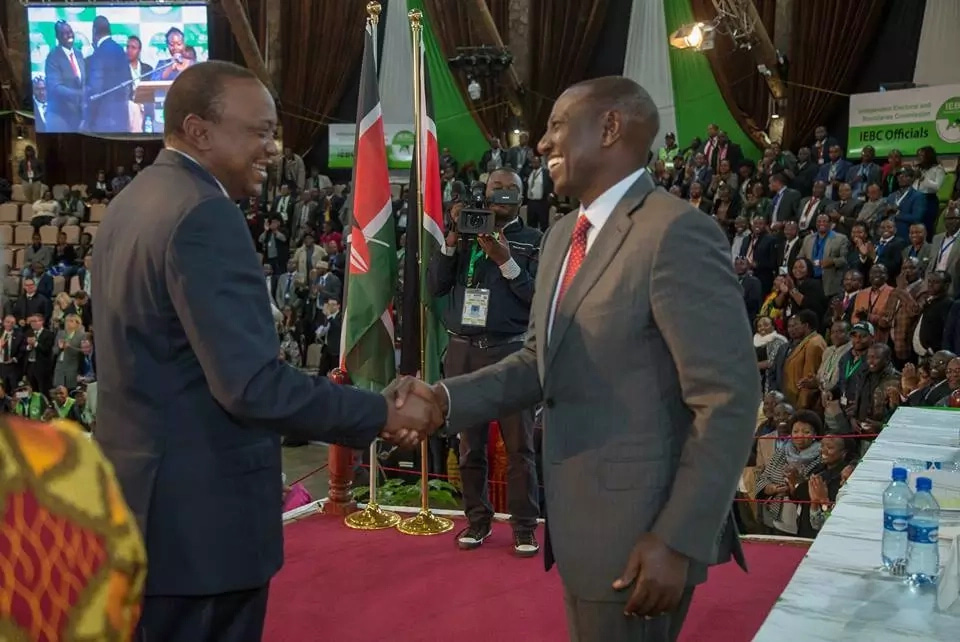 A happy Uhuru and his deputy William Ruto moments after he was declared president-elect. Photo:Uhuru Kenyatta/Facebook.

IEBC has come out to explain why its portal is still updating presidential vote numbers – Both Uhuru’s and Raila’s numbers have been increasing days after the winner was declared – The commission says there is nothing wrong with the numbers and transmission will go on until it is at 100% The IEBC has explained why the presidential vote results on it’s portal are still increasing days after declaring Uhuru Kenyatta the winner. Curious Kenyans have noticed the numbers on the portal were still tallying days after the announcement was made. They questioned why the site was still counting the numbers claiming it was ‘enough proof’ the vote was not credible.

IEBC Communication and Public Affairs Manager Andrew Limo who clarified on the tallying saying there was nothing unusual about the increasing numbers. Uhuru was announced winner with 8,203,290 (54.27%)votes by IEBC chairman Wafula Chebukati while Raila trailed him with 6,762, 224(44.74%) votes. The Communication manager said IEBC declared Uhuru the winner on the basis of the manual forms but they are still receiving the forms electronically which is why numbers on the portal keep varying.

“There is nothing sinister. Availing the forms electronically was delayed by several factors including network issues but we have been receiving them but it won’t change the final tally at all,” said Limo on Monday August 14. The electronic transmission will go on until IEBC achieves 100% from all the 40,883 polling stations, added Limo. “The perception is that we are receiving new results. We had all the manual forms by the time the chairman was announcing the presidential winner,”

Raila has disputed the results claiming he was rigged out after the IEBC IT system was ‘hacked’. He however did not prove how that was done and has said he will not go to court. But the commission maintains the election was credible while all the international and local observers have given the exercise a clean bill of health.

A happy Uhuru and his deputy William Ruto moments after he was declared president-elect. Photo:Uhuru Kenyatta/Facebook. IEBC explains why numbers on it’s portal keep changing days after declaring winner IEBC has come out to explain why its portal is still updating presidential vote numbers – Both Uhuru’s and Raila’s numbers have been increasing days after