I Lost Former President Kibaki for Five Minutes and it Was Hell, 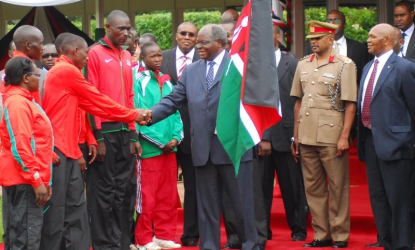 I Lost Former President Kibaki for Five Minutes and it Was Hell, Says Retired Aide-de-Camp

The president’s aide-de-camp (ADC) could be the country’s most trusted man. A confidant of the Head of State, he is the man even the most powerful individual on the land must listen to.

Col (rtd) Geoffrey King’ang’i was one such man when former President Kibaki was the Head of State. King’ang’i’s appointment to this position was not only humbling, but also a great opportunity to be part of the power elite.

We met him at his new office—National Cerealsand Produce Board (NCPB) in Industrial Area, Nairobi— where he is the board chairman. From our initial conversation we notice that he is not only humble but also approachable.

So what exactly does an aide-de-camp do?

“ADCs are field assistants for the president. My role was attending to ceremonial duties which could involve inspecting the guard of honour, visiting foreign countries with the Head of State or attending other ceremonies that come with protocol.

“I was also the president’s gatekeeper—always ensuring that whoever had access to the president had been cleared both in the office and in State House,” King’ang’i starts.

King’ang’i certainly felt the weight of this office despite his training.  “I was properly prepared and ready to take up the challenge,” he says.

His first day at work was not an easy one. It was  at the onset of campaigns to push for the passage of a new Constitution in 2010 and a huge crowd had gathered in Embakasi. The president attended the event.

“There was a lot of pushing and the podium was full. It was very stressful trying to find our way to the podium but we finally did,” King’ang’i recalls.

But more was to come. The worst experience of his career when he lost the president when they attended the General Assembly conference in the US.

He says there were several other meetings scheduled to take place within the same building and immediately they finished the first meeting, the Head of State was cleared to proceed ahead of him.

“It was my first visit with the president outside the country. I got separated from the president for about five minutes since he was cleared before I was. This can seem short but  it was very long for an ADC.”

“Remember it was a very big building and almost everyone was in uniform. I could see the President a few metres away but I could not shout or do anything since I was awaiting clearance.”

The former ADC recalls that he had to force his way through the clearance door to catch up with the president who was now walking without security.”

“ADCs are not allowed to leave the president’s sight even for a minute. When this happens you go crazy. If you lose him, it is your funeral,” he adds.

The promulgation of the Constitution was the biggest occasion for King’ang’i because he had to ensure that the event ran smoothly.

“It was the biggest ceremony in my service. The entire Cabinet as well as civil servants present were dressed in medals. There were a lot of prior discussions on who was to be where in terms of protocol. Even the pens used to sign the Constitution were tested over and over again,” he remembers.

Each copy of the Constitution was signed with a different pen as top officials strived to get it right.

As the person most immediately responsible for the president’s security, he had to deal with incidents where the crowd became too comfortable with the president and tried to approach him, especially in public functions.

“There is always somebody trying to find his way to the president. Most times we use body language to signal other security officers to ensure that such persons do not get near the president,” he says.

King’ang’i remembers how he had to keep a straight face even when the president cracked a funny joke—he could not be tempted to laugh or respond in any way.

“My job was not to react to what he said for the simple reason that it was not my job to approve what he said or find it funny.”

Nonetheless, King’ang’i enjoyed  his job. It did not matter that he was a former military officer without much of a private life.

“I lived in State House with my family and we would go out on very few occasions. I went to church once in a while but it had to be an early service. You have to be completely dedicated because you are working all the time. The ADC does not have a deputy . . . he doesn’t get sick and so I thank God I was never sick during that time.”

His family had to adjust to his life, and this meant keeping  a low   profile by remaining indoors.

“I did not want my family exposed to the public and so they lived a fairly normal life although maintaining a low profile was key. I was the key person responsible directly to the President and not family.”

He describes Kibaki as an avid reader of newspapers and books to keep abreast of current affairs.

“He was a keen listener and very interrogative. He was a difficult person to approach. You had to know exactly what you want to tell him before approaching him because he had fast hand information on almost everything.”

I Lost Former President Kibaki for Five Minutes and it Was Hell, Reviewed by samrack on August 15, 2015 .

Share thisFacebookTwitterPinterestEmailWhatsAppI Lost Former President Kibaki for Five Minutes and it Was Hell, Says Retired Aide-de-Camp The president’s aide-de-camp (ADC) could be the country’s most trusted man. A confidant of the Head of State, he is the man even the most powerful individual on the land must listen to. Col (rtd) Geoffrey King’ang’i was one