I got a new lease of life 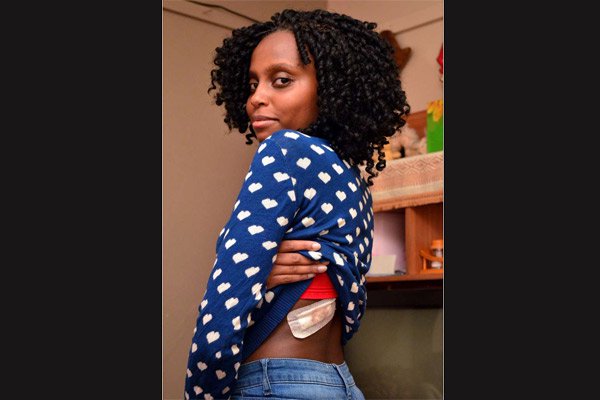 Ann Wanjiru shows off her bandage after she underwent surgery at AIC Kijabe Hospital on 9th August to remove a bullet that was lodged near her spine. PHOTO| FRANCIS NDERITU

I got a new lease of life

On the evening of Monday, February 15, 2016, Anne Wanjiru Ndira, 20, and her younger sister were heading to their mother’s workplace just metres from their house in Kikuyu Town. Suddenly, she was hit by a bullet fired by a police officer said to have been pursuing suspects who had escaped from the nearby Kikuyu Police Station.

‘TRAGEDY HAS INTERFERED WITH MY DAUGHTER’S LIFE’

She was taken to a private hospital in Nairobi for treatment, but the doctors there advised her parents to take her abroad, saying that removing the bullet was a high-risk operation. Besides, they lacked the necessary equipment and expertise, so they discharged her after a week.

To have the operation done abroad, Wanjiru’s family needed to raise about Sh6 million to cater for air tickets, treatment and accommodation.
The family was thrown into anxiety, afraid of what might happen to Wanjiru if the bullet moved, and wondering how they would raise the required amount.

When the Nation visited the family in June this year, the air of despondency enveloping their house was palpable. Wanjiru’s mother, Jane Njeri, was particularly distraught.

“Tragedy has interfered with my daughter’s life. I am upset because no one has been held responsible,” she lamented.
For 18 months, Wanjiru went for fortnightly check-ups, a routine that not only wore her out, but also affected her studies while straining her family’s finances; the family spent more than Sh1 million on regular hospital visits and scans.

When her story was published in the DN2 on July 3, the head of surgery at the Kijabe AIC Hospital, Dr Peter Bird, contacted this writer.

“I read with interest your article in today’s Nation regarding the plight of this young lady with the bullet lodged near her spinal column. Looking at the X-rays, however, I was surprised that Wanjiru was being advised to travel abroad for this ‘difficult surgery’,’’ Dr Bird e-mailed, and expressed confidence that the procedure could be done locally.

“On speaking with one surgeon, he doesn’t see this as such a difficult operation. It is certainly within our capabilities at Kijabe, and at a fraction of the stated cost,” he added.

Dr Bird further warned about “the scams that exist in Kenya’s medical system in recruiting cases for overseas hospitals”.

“It would be important to see all her scans and X-rays. We would be happy to give Ann a second opinion if she’d like to come to Kijabe,” he offered.

Thereafter DN2 linked the family with Kijabe hospital for consultations.

“We did not have any money apart from bus fare. We had exhausted our resources on regular clinic visits but the doctor received us warmly and conducted fresh scans,” says Josphat Ndira, Wanjiru’s father.

While the family was apprehensive about the outcome of the surgery given the reviews by doctors at the previous hospital, Dr Bird assured them that it could be done successfully at Kijabe. Eventually, a date was set for the surgery.

So on Wednesday, August 9, 2017, Wanjiru underwent the operation.

“I insisted on voting before going for the surgery. It was my first time to participate in an election. My parents and the doctor honoured my request and agreed to have the surgery a day after the elections,” Wanjiru joked, profoundly relieved.

After a surgery that lasted just 20 minutes conducted by a team of five experts including Dr Bird, the 9mm piece of lead was successfully removed. The total cost of treatment at Kijabe was Sh18,560.

The doctor said that it was a high-velocity bullet “that had travelled tangentially across to the left side, ending up under the tip of her left 12th rib. It had not entered any body cavity, such as the abdomen or chest.”

Contrary to what Wanjiru’s family had been told, Dr Bird said the equipment needed to operate on her is now available in many parts of the country following the procurement of medical equipment by the government, including almost 100 C-arms (an imaging device) for all counties.

“Any reasonably trained surgeon in Kenya could have performed this simple surgery,” Dr Bird noted.

He added that Wanjiru had been referred abroad for two possible reasons: medical incompetence or corruption.

“This sounded unfortunately like the latter. It is a common scam nowadays. A lot of patients come back to the country often after spending enormous sums of money overseas on inappropriate medical care. Patients are being recruited by unscrupulous medical staff in Kenya and told to go overseas, often to India or Malaysia,” Dr Bird noted.

“Recruiters get paid by these overseas hospitals. This is shameful, reprehensible and corrupt. Why are Kenyan authorities not stopping this outrageous practice?” he wondered.

“Even if the bullet was lodged next to the spine, we have very capable surgeons in this country who could have safely removed it,” he asserted.

The family’s numerous attempts to have the state compensate them, including writing to the Office of the Attorney-General, have come to nought.

Meanwhile, the Inspector General of Police, Joseph Boinnet, has since acquitted the police officer who shot Wanjiru.

As Wanjiru recuperates at home, she is full of cheer. “I can now concentrate on my studies without worrying about my health and possible paralysis, says the third-year student at Cooperative University, who returns to college in September. “I am thankful to the Daily Nation for telling my story, the Kijabe Hospital doctors, and particularly Dr Bird, for his compassion, and to all those who helped me to get my normal life back to normal.”

Ann Wanjiru (center) poses for a picture with her siblings Salome Waringa (right) and Brenda Mugethi at their home in Kikuyu Town on August 17, 2017. PHOTO| FRANCIS NDERITU

The change in atmosphere at the Ndira’s home after Wanjiru’s operation is evident; there is occasional laughter in the house, lively conversations are back, and as the family’s youngest daughter plays in the living room, it is easy to tell that calm, joy and hope have returned to the family.

Share thisFacebookTwitterPinterestEmailWhatsAppAnn Wanjiru shows off her bandage after she underwent surgery at AIC Kijabe Hospital on 9th August to remove a bullet that was lodged near her spine. PHOTO| FRANCIS NDERITU  I got a new lease of life On the evening of Monday, February 15, 2016, Anne Wanjiru Ndira, 20, and her younger sister were